Ruskin Bond - A Gallery of Rascals

“Ruskin Bond is the most addictive and entertaining writer in modern Indian literature.”

This is a compendium of memoirs and stories, so of which we have met before. Ruskin Bond has adeptly given old stories new life by putting them together in a ‘rogues’ gallery’ – though one might wonder what a snail was doing there – and going over that old beloved terrain of the hills, Landour, Fosterganj and the people who lived there.

One of the most interesting of mysteries is there the death of a woman who indulged in séances found laid out on her bed behind a locked door which is difficult to find. 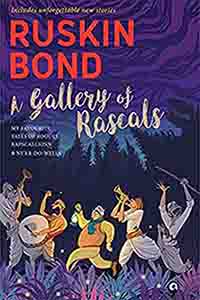 There are also some new stories —‘A man called Brain’, ‘Sher Singh and the hot-water bottle’ and ‘Crossing the Road’ – as is Ruskin Bond’s habit to make sure no one misses out.

As always the stories are simple and readable. Rascals is possibly right – none of the characters are really vindictive barring a few poisoners. The book makes for good company on a voyage or a winter evening under the blanket – take your pick.