Ruta Sepetys - The Fountains of Silence

“Sepetys tells a moving story made even more powerful by its placement in a lesser-known historical moment. Captivating, deft, and illuminating historical fiction.”

As a fan of previous books by this author, I was very excited to get my hands on an advance copy of this, her latest release. The Fountains of Silence took me to a time and place that I knew very little about, and made me fall a little in love with Ana, one of the central characters.

Opening in 1957, the setting of post war Spain under the rule of Franco is simply but effectively established by the author’s descriptions of women queuing under a burning sun, waiting for the butcher, watched by the ominous Civil Guards, referred to as the Crows by many of the characters in the book. 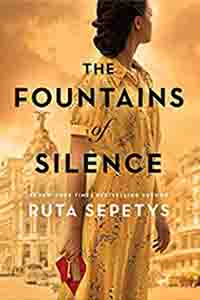 This segues into the butcher’s assistant’s memories of the brutal execution of his father. It is clear, life is hard, times are tough, money is short, and someone is always watching. In the heart of the city Ana works as a maid in the recently opened Castellana Hilton Madrid.

Full of American tourists, it is a world of luxury and opulence, far removed from the home Ana shares with her siblings. Equally alien are the Americans themselves, with their flagrant spending and louche behaviour. Franco’s Spain is Catholic and conservative, and the only way of life Ana has known. When she meets a young American man, Daniel, at the hotel she is irresistibly drawn to him despite the warnings of her family and friends.

She dreams of freedom and escape, and feels like he is one of the few who will understand despite the differences in their wealth and station. Daniel dreams of becoming a photo journalist, something that he is hiding from his father, who expects him to join the family oil business, While his Spanish born mother is supportive, Daniel knows that he must convince his father, and hopes to use the family trip back to her homeland as a chance to compile a portfolio of photographs showing the real Spain, the one that has been cut off from much of the rest of the world for years. When he photographs a nun carrying a dead baby he attracts the attention of the Crows, but stumbles on a story that will have far reaching consequences for hundreds of Spanish families.

We are introduced to several other characters, most notably Fuga, a young orphan who dreams of becoming a matador, and Puri, Ana’s devout cousin who works at the Catholic Adoption Centre, and uncovers a shocking secret. Sepetys deftly weaves together the threads of their stories as well as those of Daniel and Ana to create a rich and vivid tapestry that illustrates the harsh realities of life in Franco’s Spain and the enduring and sometimes heartbreaking consequences of some of his policies.

It is clear that the book is comprehensively researched, and the author does a wonderful job of incorporating the history into the story in a seamless manner. While I enjoy books which give the reader the story from different perspectives, I did feel at times like this made the book seem a little disjointed, as some of the chapters were short and led to abrupt changes of perspective at times. That is a minor flaw however, and more than made up for by the richness of the detail that made the book so immersive.

I found myself completely transported to the world between its pages. I also felt the ending was just a little rushed given the pace that the rest of the book unfolded.