“We urge you to step behind the headlines and have a read of this absorbing account…With clear recollections and good old-fashioned storytelling, Saroo…recalls the fear of being lost and the anguish of separation.”

What an incredible story this is! Had it been fictional, it would have seemed very improbable but it’s a real life occurrence that affirms that truth is sometimes stranger and in this case, more wonderful than any fiction that could be written or read.

A five year old child from a small town, on an outing with his elder brother, got left behind at a railway station, made his way to Calcutta, survived on the streets of the city, was taken in by an orphanage and eventually adopted by an Australian couple. And 25 years later, the same child, now grown, made the journey in reverse as he traced his biological family and reunited with them. This is the life story of Saroo Brierly that has now been adapted on screen as well. 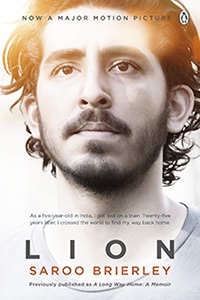 It may seem unbelievable that a person can retain such clear memories of a period of his life that occurred when he was just 5 but sometimes traumatic incidents stay with you even though you may forget what happened later.

With just certain landmarks that he recalled from his journey on the train and the stations he went to, Saroo attempted to trace his way back to his hometown using Google Earth. Over close to 5 years, he stopped and started again many times, unable to let it go but scared of losing the few memories he did have, while not wanting to offend the family who loved him in Australia. Through his persistence, instances of sheer luck and the help of social media, he finally succeeded and reunited with his mother and siblings.

He speaks about the fact that he was lucky to be given a second chance in the form of his adoptive parents who were loving and accepting and helped him adjust to a new world when he couldn’t even communicate with them. While there was a nagging thought at the back of my mind that in just 5 months, he was sent with a family half way around the world with no clue how they would turn out, the intentions of the adoption agency were good and as they say all is well that ends well, in this case at least. With a population like ours it must have been incredibly difficult to trace the whereabouts of the families of lost children in the early eighties. That’s the case even now in most places. It is clear that at the time at least, many such kids were put up for inter country adoption if the usual means of finding their families yielded no result in a reasonable period of time. Many of the kids went on to have wonderful lives too, if they managed to adjust to their new environment.
In this simply told account of his emotional journey, Saroo describes how he literally sifted through the haystack to find the needle. He was definitely twice blessed.