Shazaf Fatima Haider - A Firefly in the Dark

“By turns terrifying and amusing, this is not a book you want to read before you go to sleep. Or maybe you do.”

A jinn story meets a coming of age story. Sharmeen has a comatose father, a worried mother and an over anxious helper named Aziz. Her only refuge is her Nani’s terrifying stories that come with odd accompaniments like an invisible hand pushing her slipper from out under the bed.

At night the tree outside her window scrabbles at the pane as if trying to get in – oddly enough Haider’s villainous tree is the wise old banyan from several religions. Trees however, are the favourite haunts of jinns and janaeerees or she-jinns because they are easily possessed even though temporarily. 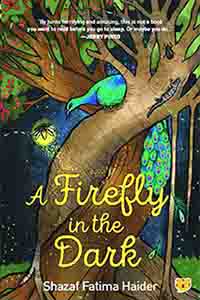 Haider’s tale takes the story of the jinn’s origins from pure fire without smoke and spins it through all the various twists and turns that the rebellious jinns have in the world of Islam. For the most part jinns are companions of human beings, at least the good jinns are, the bad jinns however seek to possess young girls on the verge of puberty. There is also a Morpir, the son of a mortal and a janaeeree. When all these beings come together creepy things begin to happen in Sharmeen’s world which is troubled enough with mortal problems.

Haider keeps the creep factor high with sudden deaths and mutilated crows but uses her good jinn the shape shifting Jugnu to propagate a message of open mindedness. Young adults should take people for what they are both the good and the bad sides of them, without rushing into condemnation.

She also takes Sharmeem through some nightmarish episodes of spirit pasts peppered with murder and mayhem with references to kryptonite – iron is the jinn’s version of it – to draw in the superkid of today who does have a passion for the dark side, JK Rowling and all.