“Makes your blood chill and your scalp prickle. . . Shirley Jackson is the master of the haunted tale.”

The novel first appears to be a straightforward story about a doctor and his chosen guests temporarily residing in a haunted house, trying to document abnormal experiences; however, Jackson’s use of cinematic vignettes to capture the atypical events and the quaint dialogue between the characters transforms the novel into a more ominous disturbance, where the characters (always kept in confusion) experience isolation from both the world and (at times) each other.

The house manages to bring out each of the characters’ demons, especially Eleanor who doesn’t always understand what’s going and is submerged by her musings about loneliness and desire. Through Eleanor’s eyes the reader is invited to experience the events at the Hill House, and as the most agitated member of the group, we feel her state of fragility and are bombarded with her insecurities and introversion. 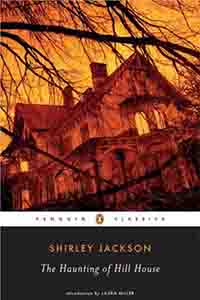 Jackson’s eerie writing provokes a sense of fear and allurement within the reader towards the novel, therefore Eleanor’s incessant terrors created by the brooding Hill House are effectively displaced onto them, causing them to feel like another guest alongside Dr. John Montague, Eleanor Vance, Theodora, Luke Sanderson and Mr and Mrs Dudley.

What a hell of a book…

I admit I am in a bit of a fix here. I’d like as many people as possible to read this book, but at the same time I am strangely reluctant to talk about it. Words can only destroy the subtle charm emanating from these pages, and I’m not exaggerating… But I will try anyway.

I only knew Shirley Jackson from her short stories, above all, “The Lottery”. That she had also written novels, I was only dimly aware of. Not so long ago, searching for some classic October and Halloween reading in our Facebook group, this book was finally recommended to me. And I was not disappointed.

The greatest surprise for me was its humour! Yes, I can only describe it as dark, black, weirdly funny humour! Four people (later on six) gathered in one approved “Haunted House”. And everyone trying to cheer the others up, or to deflect attention from his or her own fears. Jokes and snide remarks abound throughout the book. Not to forget the hilarious and prim housekeeper, Mrs. Dudley… she had me grab the next handkerchief more than once…!

The next remarkable aspect about this book was its psychology. In a certain way, it is a brilliant study on the human mind. How do we react to fear? What happens if four wildly different characters are confronted with the inexplicable? Can you put a name to what has really no name? What is evil? And what is fear itself?

Concerning the plot, I really don’t want to say too much. Just this: I had certain suspicions concerning the ending. There is one rather weak person we all suspect will bend under the constant psychological stress. And yet I was thunderstruck by what he or she did in the end… Hill House has had its satisfaction.

But this is not a gory book at all, neither mere spine-thrilling fiction. It is written in a remarkable language, somewhere between lyrical aphorism, diary entry and case study. I cannot describe it any better, I’m sorry! I can only say that this book has surpassed all my expectations. I will certainly read it again from time to time.