“The story of Lakshmibai is one of courage and innate female power.”

The third in Sonia Mehta’s series of famous lives for young children, this one tells the story of the Rani of Jhansi famous for her stand against the British during the 1857 Mutiny.

In keeping with the other books in the series, Sonia Mehta has picked out interesting facts that will make the braveheart Rani seem more alive to children – like the fact that because she lost her mother early she grew up a tomboy who liked to play outdoors instead of sitting with dolls and that she was known as Manu to the whole of Varanasi where she was born into a non royal Brahmin family. 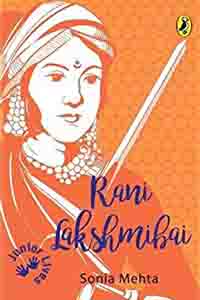 Throughout her life she encouraged women to go against gender norms and even banded together her own army of women. Mehta explains the cause of the Rani’s rebellion simply and points out that she was admired by the British for being both bold and beautiful. One can be fairly certain that children of both sexes will be delighted to declare that they are on first name terms with Rani Lakshmibai by the time they have finished the book and they will appreciate the thread of feminism that flows through the Rani’s life, highlighted by graphic illustrations.