“More fun than a rattlesnake in a barn dance brantub.”

Sister Josephine – an innocent at large in the wild, wild West. She must endure the importunations of a randy cavalry lieutenant and being abducted by a crusty outlaw.

To be honest I was sold on the title. I mean “Nunslinger”… who could resist? I was expecting – indeed hoping for – something a little sillier (and perhaps naughtier, what does THAT say about me?) than this turned out to be – but it is actually written with a straight face (well almost).

It is also rather /well/ written. It’s short, pacey, quirky and simple and trips along quickly enough with no surprises and no disappointments. 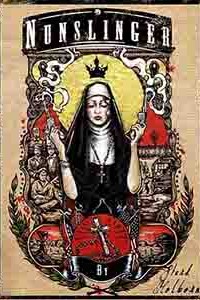 The series is being released in installments throughout 2014, with Part 1 being free (I reckon it’s underpriced) and subsequent installments at 99p. More fun than a rattlesnake in a barn dance brantub – I’ll certainly be shelling out for the next installment.

Sadly for all you paperback readers, it’s ebook only.