One of the reasons why Mr Bachmann is my favourite writer is because he writes in marvelously dark prose, bewitching and inviting to the part of me that pines after a darker fantasy than John Flanagan and Rick Riordan (though they both are also on the list of authors I love).

He does this with ‘The Peculiar’, the first of the two-work series that revolve around the lives of a pair of siblings and an English gentleman in Old England where faery and humans coexist and where magic is almost blended in to the mundane lives of humans who reside there.

The protagonist of the book is a boy enthralled by the beauty of his father’s side, a boy born of a human and a Sidhe gentleman, the highest of the faery…. Bartholomew Kettle, or ‘Barthy’ as his sister will have you know him. 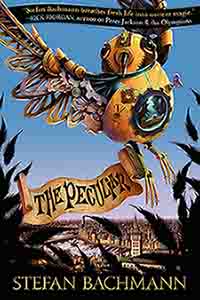 He lives with his younger, more transformed sister Hettie who is also a changeling, but who the faery blood has shown up stronger in, causing discolouration and strange branches like antlers to grow from her head, the most beautiful ones Bartholomew has ever seen.

His Sidhe father left the family a long time ago, when Bartholomew was barely old enough to remember, but he does recall that he was a sly laughing thing whom spoke to him in a strange ancient language.

Things are not easy for changelings, at least not in Bath. They are shunned by both humans and the faeryfolk, and soon the hollow bodies of their kind start appearing in rivers, their internal organs all gone, just a husk of skin. ‘Don’t get yourself noticed and you won’t get yourself hanged’ is a phrase that Bartholomew and his sister live off, and even more when the strange murders start occurring, with now good reason whatsoever.

This soon changes when Bartholomew sees a peculiar lady decked in the colour of plum whisk away a neighbour’s child, also a changeling, one of the only friends Barthy makes claim to…and when he doesn’t come back.

When he dives into the circle of mushrooms that the pair disappeared into and finds himself in a room, then realises he has to escape and feels pain engulf his arms and legs. When he realises he’s been marked, strange twining red lines that seem to spell one thing…But Barthy doesn’t know yet. He’s still oblivious to what he has done, though he’s sure he hates it.

He attempts to summon a house faery, one who will help with the chores and be his companion, but things go even more downhill from there. The faery he has supposedly summoned is a ‘raggedy man’ whom hides in Hettie’s closet and sings her odd ancient songs, but Bartholomew’s alright with it, for he has gotten an answer from the faery, one about the marks on his skin, so deep and cruelly beautiful. They mean ‘Ten’. Boy Number Ten.
And then Hettie disappears, and Bartholomew’s mother won’t wake from a deep sleep. He sets off to retrieve his sister, but ends up getting himself noticed more, first by the lady in plum who has another face in the back of her neck, then a certain faery councilman by the name of John Lickerish.

He finds some sort of comradeship in a nervous English gentleman, one that is intent on finding the lady in plum, who Arthur Jelliby is sure asked for his help in one unfortunate accident that he’d been in involving him smashing down a very expensive wooden door.

The pair have no idea that they’re getting into a very dangerous situation, one that has been plotted for millennia, and that it might result in the destruction of the entire human race, if not England. Bachmann makes magic leap through italics and poetic sentences, an innocently dark humour and the conflict of the feelings a young boy feels for love or for sense of duty, and with this he brings to life ‘The Peculiar’.

It is a very fun and interesting read for avid fans of Poe or Lovecraft, much more than just a gothic fantasy or murder mystery.