“Delivers a lot of praise and enjoy. The story comes off the blocks with almost alarming speed … he tells a story like a pro … 11.22.63 kept me up all night.”

Jake Epping discovers a time-portal which allows him to travel back to the late 50’s. His plan? Prevent Lee Harvey Oswald from killing JFK and save the world for western democracy. Unfortunately, he hasn’t fully grasped the meaning of the “law of unintended consequences” and when he returns to the present day he discovers that things haven’t quite turned out for the best.

Let me first ask a question… What in God’s name was he thinking? Jake is a high-school English teacher. An educated, intelligent man. A Westerner. He undoubtedly HAS heard of the law of UC and is also aware of the Grandfather Paradox and the Butterfly Effect. Indeed these are all discussed (briefly) in the early part of the novel and are subsequently dismissed with (more or less) a blithe “what could possibly go wrong?”. Off he goes to meddle in world affairs during a period when the world faced (i.e. never came closer to) nuclear armageddon, and resolves to save the life of the man who held the keys to the most powerful in history. Ten out of ten for ambition, Jake. Minus ten million for geo-political forethought. 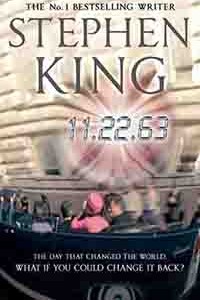 None of which is helped by King having put his “trousers of time” on upside-down. Traditionally, the concept states, one present spawns many futures (or one past spawns many presents – it amounts to the same thing). For King, however, one present is spawned (or, more correctly, adjusted) from an infinity of pasts which seems metaphysically arse-about-face to me. Well… maybe I have misunderstood the trousers concept and maybe the technicalities don’t even matter; in the end, perhaps King’s premise is simply there to advance the plot. It doesn’t kill the story by any means, but, it is sufficiently shaky that I felt duty bound to knock a star off the rating with a “needs more work” note. Niffnegger did it better, in my opinion.

As to the plot, there’s a rich mix of a number of iconic time-travel themes here; the temporal displacement chills of The Time Machine, the action and pop-culture nostalgia trip of Back to the Future and even a bit of pan-temporal bonking (The Time Traveller’s Wife). The love-affair-that-spanned-time-itself sub-plot does prove to be a bit of a distraction from the action, though. Top it all with the big-ol’ Kennedy assassination thang, something that we all know to be bit of a national obsession in the US. All of this piles on the interest and ensures that the story races along well enough (albeit in a rather linear fashion) and there’s rarely a dull moment, which is just as well given the size of the book.

There are a few rather nice little nods to his previous works; the fun is in spotting them, but I’ll give you one for free – on his first trip to the past, Jake spots a red and white ’58 Plymouth Fury…

Characterisation. King’s protagonists are frequently highly distinctive, being typical (even stereotypical) Americans; sincere, easy-going, idealistic and so-on (his villains are frequently stereotypical villains). I have to say that in this novel they are rather blander than usual, however. It’s hard to put my finger on it but few of the characters really jumped off the page and grabbed me. Jake Eppings, the main protagonist, is typical and you know the sort: a High School English teacher, slightly faded jeans and a subdued sports coat over a light blue shirt. Bland haircut, plain face and an easy-going, unobtrusive manner. Most of the characters are like this and it makes them hard to identify with in the same way that one would expect of characters from other King works

The prose is… well.. it’s typical Stephen King. He’s written a lot of books and we “constant readers” will be quite familiar with his style; polished and very readable. Of course, it’s easy to criticise King (as so many do)… Yes, he pads his work out with huge quantities of “extraneous detail” and in 11.22.63 that results in a novel that is nearly (but not quite) 1000 pages long. I believe that this padding helps to paint a vivid picture of the setting within which he builds his story and given that this one is set (largely) in late 1950’s America, that picture is a distinctive one. Yes, he slips all too easily into a somewhat irritating (to a European reader), folksy American idiom but then, he’s an American folk author – what the hell do you expect? If you cut through all of that, what you have is good, clean, readable and highly accomplished writing. No it’s not “literature”. Yes, perhaps it is “trash fiction”, but it’s /good/ trash fiction and it’s always evocative, vibrant and idiosyncratic.

Overall, there’s nothing here to set the literary world afire: the “time-travel-JFK-what-if” theme is conventional and rather predictable. But King doesn’t write “literature”, he writes stories and, as always, he manages to take this conventional theme and turn it into a compelling, deeply absorbing and perfectly enjoyable page-turner that will keep his fans happy (and reading deep into the night!) and shouldn’t offend too many casual readers (it may even covert a few).

It may not rank as the best King to date, but it certainly sits comfortably alongside his best.