“King’s magnificent uberstory is finally complete… King’s achievement is startling; his characters fresh… his plot sharply drawn… It is magic.”

Despite having been an avid reader since I was a child, I am ashamed to admit there’s a blind spot in my reading history when it comes Stephen King. Despite being one of the most prolific and celebrated writers of all time, I have to confess that I have never actually read a Stephen King book before now. Blasphemous, I know.

King has written many famous books, from The Shining to Pet Semetery, but he has personally described The Dark Tower books as his magnum opus. Deciding it was high time I give King my attention, I picked up the first instalment of The Dark Tower, Gunslinger, and began to read. 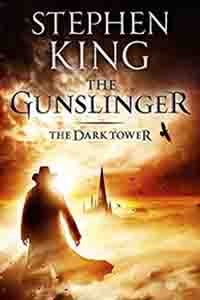 The Dark Tower series is very different to any fantasy I’ve read before. King has taken the high fantasy and stuck it in a blender with the Western genre. Much of the lore and mythology of The Dark Tower’s world is inspired by legends like King

Gunslinger tells the story of the last gunslinger named Roland Deschain as he travels across the barren lands in pursuit of the mysterious Man in Black. King has explained that his Dark Tower series is inspired by classic Western films such as The Good, the Bad, and the Ugly, and, to my mind, Roland is the sort of character you’d get if you mixed Clint Eastwood’s The Man with No Name with Tolkien’s Aragorn. A stoic man of few words, Roland belongs to a world that has all but died as he crosses the mysterious land before him.

Plenty of mystery is set up in The Gunslinger and many questions aren’t answered in the first instalment. What happened to Roland’s homeland? Where are the other gunslingers? And who or what is The Crimson King? As the first entry in an epic saga, The Gunslinger provides just enough answers to keep the reader invested but makes sure to leave plenty to be explored in future books. The Gunslinger itself is fairly short, only 200 odd pages, but I personally find this to be a good thing. The rest of The Dark Tower books are much longer, some over a thousand pages, but The Gunslinger allows newcomers to dip their toe in this new world without having to feel completely lost in a huge, intimidating tome.

I particularly enjoyed King’s writing style in The Gunslinger. Like a strong, silent cowboy, King doesn’t spend pages ironing out every little detail. The writing includes only the essentials and, for me, this helped bring to life the feeling of a rough and sparse land where luxuries are few and nothing is quite what it seems. At times it did feel a little too sparse, and I occasionally had to re-read a passage just to confirm what had happened, though these incidents only occurred a few times. The tone of the book is gritty and there’s plenty of violence, sex, and bad language, though it’s certainly nowhere near as adult as the likes of Game of Thrones, Harry Potter this isn’t.

It should be noted that The Gunslinger was re-released in 2003 with some edits because King felt the original novel was too dry for newcomes and contained inconsistencies in the lore which needed fixing. All editions released after 2003 are edited versions so you may want to make sure that’s the edition you buy.

Having only read the first entry in The Dark Tower series, I feel unqualified to give my opinion on the series as a whole, but The Gunslinger certainly has my interest and I liked it enough to want to check out the next instalment in the series. If you’re a fan of fantasy or are looking for a new world to explore then I’d definitely recommend checking out The Gunslinger.