I’m really impressed with this one. It’s a story of a nine year old girl, Trisha, who gets lost in the woods and manages to find her way out. However, it’s not that easy of course. There are falls and stings, bad foods and good foods. There are strange sounds in the woods and voices in her head. And she is sure she is being stalked by some unknown terror.

Our little heroine is the main character, and she is more than that actually. King has devoted the whole story to her and actions. Two hundred and ninety pages of just one person walking through a forest. We see her at her lowest ebb, we see her at her highest point, and we see her in full daydream mode. How king has managed to write that I just don’t know, but I wish I was that good. 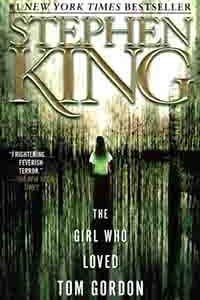 The few other characters in the book have very minor parts. Her mum and dad are divorced and live apart; her moaning, never happy 14 year old brother, are the main ones. A hunter shows his face and a nurse. What of Tom Gordon? He’s a pro baseball pitcher and Trisha favourite Red Sox player. He appears fairly often, but only in visions or dreams, but always in a way that helps move her on from where she is.

As you can doubt see, I have really enjoyed this one, as I do with all of King’s work, apart from Under the Dome, of which the less said the better! Published in 1999, it’s an old one, but you know the saying, ‘oldie but goodie’. And is exactly what this one is! It’s still in print …

Or can have trawl of the local charity shops and get it cheaper. Good hunting!

This is a more visceral, real horror story, the story of a 9 year old girl lost in the forest. A little girl who finds unplumbed depths of resilience and who uses her love for her favourite baseball player as a crutch.

King as always, has an uncanny knack for the internal dialogue of his characters. 90% of the entire book is Trisha, on her own and yet it’s never a monologue. Yes there are the occasional moments of ugh and there’s an undercurrent of an unnamed and unidentifiable paranormal threat but it’s not the dominant thread of this story.

It’s beautifully written, you desperately want the protagonist to survive and to survive wholly intact but as this is King, are we going to get what we want?

Give it a go, you’ll be pleasantly surprised.