“An impressive work of mythic magnitude. May turn out to be Stephen King’s greatest literary achievement.”

I shouldn’t need to say this – but let me just emphasise: like all reviews, this is just my opinion. You may have an entirely different one and that’s fine. Now that that’s out of the way *my opinion* is that you think twice before embarking on this series. Worst. Ending. Ever.

A while ago, I decided enough is enough in the matter of waiting for the next volume in various fantasy series to come out, so I will only embark upon those which are complete. The Dark Tower fitted this bill and has appeared on several “must read” lists with good reviews (which now baffle me) so I gave it a go. 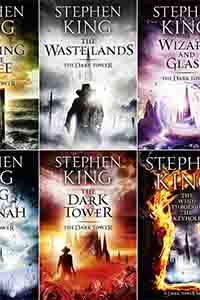 It’s difficult to pin the genre down as the series has elements of fantasy, western, sci-fi, horror and post-apocalyptic/dystopian in it. The story takes place in multiple worlds, several of which look a lot like ours and much of it actually in ours (during different times). However, *most* of the story takes place in Mid-World – a place which had reached a state of technological advancement centuries before the start of the narrative – only to experience some sort of massive upheaval and wars. This has resulted in a world now sparsely populated with (mainly) small farming communities. The detritus of the former technological age is still lying around and some of it still works – albeit often in scary and unpredictable ways.

Mid-World has ‘moved on’ – good for relationships, not for worlds it seems. Time, distance and even direction are becoming … uncertain. It would appear this is because the Dark Tower – a crucial lynchpin – is failing. It is unclear whether the upheaval experienced by Mid-World is the cause or an effect of the Dark Tower’s endangerment – but there are those actively working to hasten/cause the fall of the Tower, and they use both the aforementioned technology and magic to do so. The story follows the efforts of (eventually) a small group to find the Tower; most of whom are from our world, but their leader is a man from Mid-World who goes by the title of Gunslinger – more accurately a kind of wandering errant knight with handguns instead of medieval weaponry. As a result of their attempt to find the Tower, they end up clashing with those working towards its decline on numerous occasions.

Fans of King will recognise characters who make an appearance, or who are referenced, in the series from other books of his. King occasionally lowers the fourth wall in a slightly conceited fashion, but it’s also a unique way to do so and therefore intriguing. In addition, there are occasional subtle, and not so subtle, allusions to beloved and highly recognisable works of popular fiction – which is entertaining and provide a bit of much-needed light relief.

This is a story replete with darkness, adult themes and serious issues. Whilst I liked the multiple-storylines (complex, epic fantasy is my usual reading fayre); I have to be honest, I found it hard going much of the time. There is something about King’s writing style that I can’t get on with. Sometimes, I just had to settle for being able to follow the gist of what was occurring and press on (though in the interest of balance, I will confess I was *once* so absorbed that I missed my tube stop). The first book especially was somewhat disjointed. This is partly because it started life as 4 separate short stories, and was not originally conceived as a coherent whole.

In the introduction to the new, revised edition, King acknowledges that the first book is not his best writing. I also found the verses at the end of the chapters in the 6th book *really* annoying. However, the ending is awful and I felt robbed at having gone to the effort (and it was effort) of reading it all. Worst. Ending. Ever.

Now I have read King’s Magnus Opus, I doubt I will do so again. Furthermore, I *would not* recommend this as something for people to tackle who are new to the genres mentioned in the second paragraph. At 7 books (8 if you include 4.5) ranging from 230 – 1000 pages each, it’s not a light undertaking and it’s possible it would, unjustifiably, put you off said genres.