“First came the days of the plague. Then came the dreams.”

…and for a book that’s nearly 1500 pages long, that’s a signficant potential problem with implications on the reader’s personal hygiene, nutrition and gainful employment. So, in matter of fact it is eminently putdownable – out of sheer human necessity. It would, however, be churlish to point out that a book of this size is really quite difficult to pick up or indeed transport over any vertical distance in an upward direction. But I digress. The Stand is a wholly absorbing story and I had to read the last 400 pages or so in one frantic late night sitting (and I can think of quite a few frantic, late night activities).

The Stand is /the/ archetypal post-apocalypse story, writ through with a (I’m afraid, rather heavy-handed) religious message. This religious theme is somewhat troubling to the atheistic reader although it can, with effort, be accepted as a part of the story. King clearly takes a huge bite out of Tolkien’s The Lord of the Rings for inspiration and above that, it is possible to divine (sorry!) the genesis (sorry!) of many more recent apocalypse stories; LaHaye/Jenkins’ awful “Left Behind” series, Mad Max and Swan Song. I suspect that even the Wachowski brothers probably called on The Stand when working up the Messianic and Adversary themes in The Matrix. 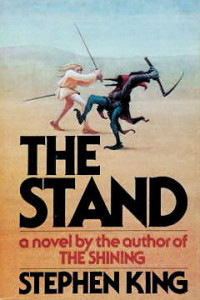 As I mentioned, The Stand is a very enjoyable work, despite its enormous size, and unlike some of King’s other leviathans, I didn’t find myself flagging (sorry! pun not intended) towards the end. The story grips you and drags you along with it, the characters engage and the writing – King at his typically American-folksy best – is easy to read. As per most of his books, its characters are the usual band of likeable, blue-collar American stereotypes. They all seem to wear “chambray shirts”, “pegged jeans” and “easy grins” (I’ve not yet worked out what a chambray shirt is nor why their jeans should be pegged, but there you go…). Also, as per typical King, many of them are doomed to an untimely or nasty death: King does like to telegraph these deaths several chapters or more in advance. Some people hate this practise: I personally don’t mind it too much but it does feel a little bit like King trying to be a bit clever and I wish he’d stop it.

My one real complaint about the book is the ending. Well, not the actual physical last few pages which are pretty lame and seem to have been tacked on just to provide some “closure”, but the denouement, the final face off between the Walkin’ Dude and the delegation from the survivors. It is classic Deus ex Machina and leaves the reader thinking “Oh! Was that it?” Sorry Steve, but the effort you put into “updating” the book would have been better spent coming up with a half-way decent Armageddon.

I had never really noticed until I started reading King again recently that his stories are heavily peppered with brand-name references and I’ve come to wonder whether he engages in more than a little product placement.

This edition is an “updated” version. The original was written in the late 70’s and, a decade later, King clearly felt that its age was showing so he added 10 years to the referenced dates and perhaps brought a few cultural references up to date. Unfortunately this process was done rather patchily and produced some glaring anachronisms: in my opinion the earlier version was quite strong enough to stand as it was published and nothing less than a full re-write would have done the job properly. It also includes several hundred /extra/ pages that were edited from the original publication.

It also also comes with a handful of “illustrations” which, were I feeling less generous, would earn the book a negative star. They look like they were drawn by an A Level art student with a severe migraine and a big, fat black magic marker and one wonders why on earth they were included.

The Stand will, I suspect, abide for generations to come as one of King’s best stories and perhaps even as a seminal piece of 20th century pop-fiction. It occupies a special place in the hearts of Kings “constant readers” and while I personally think he’s done better, I don’t believe that he’s yet done /much/ better.