Stephen King - Under the Dome

“Seven Words: The best yet from the best ever.”

The New England township of Chester Mills wakes one morning to discover that it’s locked inside an impervious and mysterious barrier. Tensions begin to rise amongst the townspeople as local officials take control, and a series of grisly murders is unlikely to help matters.

This is not one of King’s best, but I’ll have to qualify that statement carefully. Under the Dome is typical King, an enormous, absorbing page-turner with a host of likeable (or likeably dislikeable), engaging and very American characters. I haven’t sat up till the wee hours reading for a few years now but this and The Stand broke that drought comprehensively. If that were it, I’d be happy to give this a four star rating (I’m trying to ration my five star awards) without a moment’s thought. But… 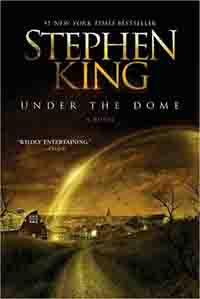 But, there’s a couple of things something about UtD that grate a little. First off, I have always enjoyed and connected with the characters with which King peoples his novels and, as I’ve mentioned, UtD is peopled with the usual cast of personable characters. They are stock King-clones (farmers, librarians, university lecturers, small town police chiefs and so-on) to be sure and they are beginning to wear a little thin, but they are comforting and familiar for all that. The issue I have is with the main baddie: Big Jim Rennie, a larger than life villain, head of the town council, a used car salesman of ill repute, happy to trample friend and foe alike in day to day politicking and business and also content to take rather more murderous measures when the dome comes down. My problem is that he’s just too bad. So bad in fact that he becomes a parody bad-guy who would be better off running Gotham City (or Springfield, for that matter). How he managed to end up running some fly-speck burg in Maine is beyond me and it taints the novel as a whole – well, how could it not? Rennie is pretty much the main character and the credibility of the novel suffers by association.

This objection extends beyond the man himself. As tensions in the town mount, Rennie sets up a dictatorship/police state that would have Randall Flagg shaking his head in mute appreciation. That the people of Chester Mills should, not only accept the situation but actively participate in it seems unreasonable, but that Rennie should be able to find so many thugs and bullies to man his burgeoning police force says something about King’s view of his countrymen.

But, then, King avowedly wrote UtD as a political novel and, even to a reader with limited understanding of the American political landscape, it’s quite clear where he was going with this. Brutally clear, in fact, because the political satire he is trying (I think) to write is not in the least subtle. Indeed UtD is pretty much a parody of the Republican/Democrat, Conservative/Liberal, Religious/Atheist, reactionary right/tolerant left division and it’s obvious on which side King stands. It’s good vs evil on a small town scale and there are no hanging chads in this story. I guess that works well enough for those of us who don’t live within the US political system (although it feels far too black and white to me) but it seems likely that many American readers will see this as a horrendously oversimplified depiction and I would guess that perhaps half will be deeply offended by such crude parody of their sincerely held political beliefs.

Despite my objections, I’ll admit to a somewhat vicarious thrill at the almost ridiculous excesses perpetrated by Rennie and his henchmen and that, of course makes the fightback by the plucky band of dope-smoking blue collar intellectuals all the more engaging. King is frequently accused of writing pulp fiction – “read it then chuck it” – to which my response is that “you say that like it’s a BAD thing?”. Pulp fiction, brain-candy if you will, has its place and King’s strength is that he can rise head and shoulders above the threshold below which reside the less capable but more prolific authors (who shall remain nameless). I’ll admit that the explanation for the dome, revealed in the last few pages, turns out to be rather silly (to say the least) but, then, try reading some of his other stories. Are they really that much less silly than this? Really? In the final analysis, I reckon that his sense of humour (and, like all of his work, UtD includes some gloriously naughty, LoL moments of extremely black humour) and sheer story-telling ability set him well above the common herd and so, despite it’s (many) faults, UtD remains classic King.