“An incredibly gripping, moving, and literate work of art. Rarely does an author manage to re-create a moment in history with such mastery, authority, and psychological insight.”

In 480 BC, the Persian empire descended upon Greece with the largest force the world had ever seen. In order to buy time for the rest of the country to rally its armies, a force of 300 Spartans, accompanied by a number of allies from other city states including Arcadia, Thebes, and Corinth, travelled to a far-flung corner of Greece known as Thermopylae to stall the invaders for as long as possible.

Despite the overwhelming odds, the Spartans and their allies were able to hold off the Persian forces for over three days before they were finally overwhelmed. While some of the Greek forces did choose to retreat as defeat drew ever closer, the Spartans, along with the Thebans, covered the allies’ retreat and their valour has since gone down as one of the finest and most famous last stands in history. 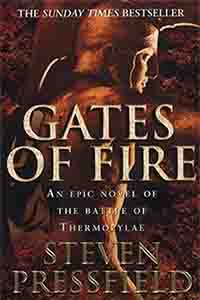 Gates of Fire is a historical novel which tells the story of the Spartans who would eventually go on to play key roles in the legendary battle. After his own city is sacked, a young boy named Xeones travels to Sparta where he becomes a Perioikoi, a free but non-citizen inhabitant of the city. As a Perioikoi, Xeo serves the Spartans and it’s not long before he squires for a young Spartan boy named Alexandros. The novel follows the two as they grow up in Sparta, undergo the rigorous training of the Agoge, and eventually find themselves holding the pass of Thermopylae against the Persian forces. Following the pyrrhic victory over the Greeks, the Persians discover the body of Xeones at death’s door. Impressed by the Greek’s bravery, the Persian king Xerxes orders the man’s life be saved, and has him recount his life story so the God king may learn more about these men who were able to defy him.

Upon its release in 1998, Gates of Fire was critically acclaimed for not only its gripping story-telling and historical accuracy, but also for its exploration of themes such as fear, courage, honour, duty, and stoicism, so much so, that the book is on the Commandant of the Marine Corps’ Reading list. What sets Gates of Fire apart from other historical fiction, is the nuance with which Pressfield dives into and explores the bond that is formed between brothers in arms, and the doubts and fears that plague their minds as war approaches. While his explorations into these subjects is deeply touching, Pressfield also perfectly captures the typical dark humour common among soldiers, which was no doubt inspired by his own time as a United States Marine.

Though the book centres around Xeones, it’s arguably the veteran Spartan Dienekes who will leave the largest impression upon readers. Dienekes was in fact a real Spartan officer who fought and died at Thermopylae. Apart from the Spartan King Leonidas, who led the allied forces, most of the names of the individuals who fought have been lost, all apart from Dienekes who, according to the ancient Greek historian Herodotus, when told that there were so many archers in the Persian army that a volley of their arrows blotted out the sun, replied with classic Spartan wit that this was a good thing, as it meant they would at least fight in the shade.

Dienekes, though outmatched in terms of physical prowess and ability by certain other characters in the novel, exemplifies the kind of soldier a good Spartan would hope to be. Though he’s certainly a skilled warrior, years of battle and the loss of comrades have moulded him into a military philosopher, who has dedicated his life to his country, and to better understanding the nature of fear, and how one can overcome it. As Alexandros’ teacher, Xeones is privy to many of Dienekes’ lessons and he’s a character that remains in your mind long after you’ve turned the last page. In a military society that esteems strength and might, Dienekes reminds both readers and his pupils that there is still value to be found in love, compassion, and contemplation.

As you might expect from a novel that studies soldiers from one of the most elite fighting forces in history, Gates of Fire doesn’t shy away from the true horrors of war. While it certainly dives into deep philosophical themes, this is also a novel punctuated by moments of extreme violence, just as Spartan’s life would’ve been. If descriptions of violence and gore, along with bad language, offend you, then you should probably skip through those passages. However, I personally feel that any book, even if it is a novel, that wants to try and give readers a sense of war and violence shouldn’t try to play down or sugar coat their realities. Pressfield excellently balances the two sides of our characters, the human side that loves his family and friends, and the side that has been conditioned to be a killing machine. Despite being trained from birth to be killers, the Spartans never come off feeling psychopathic. In fact, Pressfield’s descriptions of how broken the warriors feel after a battle reminds readers that these soldiers were still just human beings, and at no point did I get the feeling that our author’s trying to glorify war.

Another aspect of Gates of Fire I find intriguing is Pressfield’s portrayal of Spartan women. Spartan women enjoyed a great deal of freedom, at least compared to women from other countries at the time, and they were almost revered in Greece for their nobility, natural beauty, stoicism, and power. They were far better educated than other women in Greece and, when a Spartan soldier fell in battle, his lands and estate went not to his children, but to his wife. This meant that a large part of Sparta was owned by women rather than men. Spartan men understood that without women, there would be no way to replenish the numbers of those who died, and considered them instrumental in the prosperity of Sparta, and this was reflected in their respect for them. The ancient Greek historian Plutarch claims that Queen Gorgo, King Leonuidas’ wife, when told by a foreign lady that only in Sparta do women seem to be able to rule men, quipped: “With good reason, for we are the only women who bring forth men.” This unspoken power is very present in Pressfields’s novel and I found myself feeling more intimidated by the scenes involving the Spartan women than I did the men. There is a quiet but undeniable strength to the female characters, especially Dienekes’s wife Arete, and it’s clear how they were able to subtly influence the men to suit their plans.

While Gates of Fire primarily focuses on the Spartans, readers will be intrigued to find that it also touches on the Persian forces, and goes out of its way to point out that they were every bit as human as the Greeks. Modern adaptations of the Battle of Thermopylae tend to have a habit of demonising the Persians as some kind of mindless horde driven by a mad king, but that’s not the picture Pressfield paints here. Despite believing himself to be divine, as Persian kings were told from birth that they were, Xerxes comes across as more than a mere tyrant and the bonds of fellowship the Spartans feel for one another is felt by all soldiers, regardless of which side they’re on. He may be a far cry from the kind of king Leonidas is, but Xerxes isn’t presented as a monster, nor are his generals.

As I mentioned earlier, it may be Dienekes who readers will likely feel most drawn to, but that’s not to say there aren’t plenty of other characters who you’ll remember long after the book is finished. Each one feels three dimensional, with their own virtues and vices. The Spartan king, Leonidas, is crucial to keeping the moral of the fighting men high and displays none of the pomp you’d usually expect from royalty of that time period. Dienekes protégé, Alexandros struggles to live up to the reputation of his noble father, something Dienekes is aware of as he moulds him into a warrior, and the arrogant but great Spartan champion Polynikes starts off as a character you despise but ends as a character you, at the very least, respect. The dialogue between the soldiers feels truly authentic and more than once I found myself grinning at the banter they share as they prepare for battles or undergo the harsh Spartan training regimes. That said, the cost of war is driven home more than a few times and I also found myself becoming teary eyed as certain characters met their ends. This is one novel that has a seriously emotional punch.

Pressfield’s writing style is short and sweet, without feeling the need for any superfluous details, a style I think the Spartans would’ve approved of. His use of language is to the point and he uses short sentences to punctuate his writing with great effect. It’s also worth noting that the book does hint at the presence of Greek Gods, but it is up to the reader to decide whether they’re really playing a part in our story, or whether they are just figments of the character’s imaginations.

This review is starting to become rather long winded, something the Spartans wouldn’t have approved of, so I’ll wrap things up here. In short, Gates of Fire is a book that totally engrosses me, even after repeat readings. If you’re a fan of historical fiction, history, or military novels, then it’s one you absolutely should pick up. If you’re not, but what I’ve written appeals to you, then you should still give it a go. Pressfield has cemented himself as one of the finest historical fiction writers of all time and Gates of Fire is a poignant tribute to those who gave their lives protecting Western democracy.