“The Hunger Games is a violent, jarring, speed-rap of a novel that generates nearly constant suspense….”

Yet another three for a fiver from the Works. I was surprised to see such an offer, but grabbed it anyway.

So many folks have read this and they will all have their own ideas as to its merit, or lack thereof. For those who haven’t read it, this is story is a dystopian novel in which the dominate district enjoys rubbing the noses of the lower status districts, in their own crap and misery.

Part of the nose-rubbing is an annual tournament in which two youngsters over the age of 12, from each district are chosen by a draw in which their names had been automatically entered. The whole idea is to remind the 12 districts that they are ruled by the Capital, along with an annual punishment for the uprising against the Capital by the 13 districts. Yes, 13 districts – I’ll let you find out 13th. 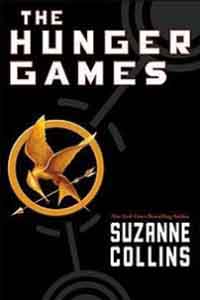 The lowest of districts is District 12 and the two Tributes as their known, are chosen and head off to the Capital to take part in The Hunger Games, along with another 22 youngsters. However, none of the 24 are guaranteed to return home, in fact, 23 of them will be killed! There can be only one winner.

Each contestant has a team who work towards getting the entrants through, doing so knowing that it is possible that neither will survive even the launch of the games. And so it begins; but guess what? It isn’t a fair game because of the role of the gamesmakers and their nasty tricks. After two weeks we have a victor, who goes off home to riches and glory. But first the tributes have to work their way through an arena, a different arena every year.

This is yet again another good read, and I really enjoyed it. As I’ve said before, because of dyslexia I enjoy books that are an easy read for me, and this one is very easy. There is a question I have though; why does this volume have a sub-title, Mockingjay Pt 2? I suppose I shall have to wait for the last volume to find the answer to that one. There can’t be too many who haven’t read these, if so, again I can heartily recommend it.

I have to admit that I hadn’t heard of this book until it was turned into a movie, which I watched and loved so much that I had to go out and buy all three books. I’m glad to say that I enjoyed the first book as much as the movie, the storyline is kept the same, which is perfect as it needed nothing changing.

The story is a dystopian novel about a yearly game played by the twelve districts, for the entertainment of those that live in luxury in the capital. The competitors are picked at random, one boy and one girl from each district, with only one survivor.

Everyone aged 12 to 18 are automatically put forward for selection. After the name is pulled out another eligible person can volunteer to take the place of the person chosen.

This year is the 74th hunger games and the story starts in district 12 and follows 16 year old Katniss Everdeen in the build up to the selection of the tributes. On the day of the selection Primrose, Katniss’s younger sister is chosen, but Katniss can’t stand by and watch her helpless sister compete in the games, she does something that no one in her district has done and steps forward.

This is just the start of the story, she must now find some way of becoming someone that the Capital can like in order to get sponsors, who can give gifts while competing in the game, luckily for her the other tribute from her district, a former schoolmate Peeta Mellark, has everything that she doesn’t, including a ploy to get her favour with the wealthy audience in the Capital which could be just the thing to save her life, but can she afford to trust someone during a game where only one can survive?