“It’s a relief to turn to the poems themselves and once more be jolted by their strange beauty, hard-wrought originality, and acetylene anger.”

For me, lunch breaks at Claire’s Accessories meant only one thing- finding somewhere to sit down long enough to take the edge of an 8-hour shift spent stood behind a till. This often left me with one solid option, the refuge of Waterstones and its comfy sofas. Not to be too obvious in taking advantage of this luxury, I’d pick up a book first with the feigned interest of purchasing it later. I had always wanted to read some Plath, having been interested in alternative poetry as most angst-ridden teenagers so commonly are and therefore picked up this copy of her Collected Poems. Flicking through at random, I stopped at a piece entitled ‘Tulips’ and more specifically, at a verse which read:

I didn’t want any flowers, I only wanted
To lie with my hands turned up and be utterly empty.
How free it is, you have no idea how free –
The peacefulness is so big it dazes you,
And it asks nothing, a name tag, a few trinkets.
It is what the dead close on, finally; I imagine them
Shutting their mouths on it, like a Communion tablet. 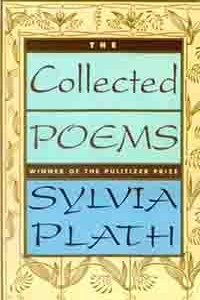 Even as I write it out now, it moves me. I don’t think anyone who has suffered so much has put something so eloquently. It’s the way she so honestly and precisely explains her existence on the other side of sanity, watching our world “from a country far away as health” and giving her beautifully nihilistic take on the benign everyday particulars that we take for granted. ‘Tulips’ remains one of my favourite poems to this day and probably fuelled any current interest I have in writing.

Recovering from her attempted suicide, she talks of how these bright ‘rust-red’ flowers fill the room- a constant reminder that the freedom she had so unsuccessfully pursued in life was so closely achieved in death. There is a feeling of being on the brink of something, being pulled back from the edge of nothingness to the ‘loud noises’ of the flowers and the ‘smiling hooks’ of her loving family, snagging her attention from the photo at her bedside. The tulips remind her of the things she wants to forget, the caring friend or relative who left them there, blooming like her heart “out of sheer love” for her, the person she has tried to ‘efface’. All these things focus her attention “that was happy playing and resting without committing itself”, reminding her that life if full of attachments that will not allow her the peaceful nothingness she seeks as the absolution sought by Communion takers.

Needless to say, I bought the book and still have it today. Having read a substantial amount more of it now than I managed on my lunch-break at Waterstones, I am even more in awe of the greatness of this writer. She is the only person I have known to date to start a poem with one word, one syllable, one question, “I?” and in that one phrase convey so much meaning as to entirely summarise the poem’s title “Soliloquy of the Solipsist”. I would recommend that anyone who can read reads this book and if anything, hope they will take away some beautiful understanding of mental health and the plight of one amazing woman who, through her mastery of the English language, raised issues which will resonate eternally.