“Tan’s book is moving, insightful, and hilare. Any bad stories about me are totally untrue, but the rest is brilliant. Best book of the millennium.”

Naturally Tan is the memoir of fashion designer and Queer Eye star, Tan France. Each chapter in Naturally Tan is aptly themed around a clothing item or fashion accessory which becomes the focal point of each memory or stage in Tan’s life. What’s more, in true Tan France style, there are fashion tips and tricks throughout the book.

Yorkshire born and from a Pakistani family, Tan begins his biography with memories from his childhood, growing up in Doncaster. Tan writes about the traditions of his South Asian heritage as well as the ways in which he strayed from these traditions as a child. Although Tan states that he never had a ‘lightbulb’ moment in which he realised he was gay, he does have memories of being told his behaviour was ‘feminine’. As well as writing from viewpoint of growing up gay in the South Asian community, Tan also tackles the racism he and his siblings faced growing up including tales of bullying and racial attacks on their way home from school. 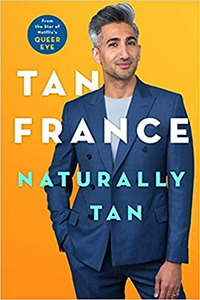 The rest of the book thereafter is told in a sort of chronological order, from his first job, his first fashion brand, and his move to America to his eventual appointment as Queer Eye’s Fashion Expert. France is open and honest about the downfalls in his life including; jumping from job to job, the stress of running his own fashion brand and how he felt at times trying to juggle several projects at once.

In juxtaposition to these lower points in Tan France’s life, however, are heart-warming tales of his friendships with his UK friends, the meeting and subsequent marriage to his now-husband Rob France, and, of course, his rise to fame in the rebooted series of Queer Eye.

In Naturally Tan, France writes about how he came to be a star in the Emmy award-winning series, Queer Eye. His reveals his initial hesitancy around the project and his phone interview in a hotel abroad, before talking about how the auditions were held.

From the negatives of being recognised everywhere he goes and being away from home on press tours a lot to the positives of changing people’s lives and the continued friendship with his co-stars there is very little about his role on the show that Tan France doesn’t discuss in this book.

Naturally Tan is the perfect book for fans of Queer Eye and Tan France’s fashion stylings in the programme. What’s more, as a gay, South Asian man, Tan France’s life fills a gap in a still under-represented group in the media and his rise to fame will hopefully show other young people like him that they do belong.