“heart-wrenching . . . An American Marriage poses profound questions about what we owe each other, and what injustices we allow to persist.”

This book has featured in loads of must read books of this year and the blurb intrigued me.

I finally read it as the year is drawing to a close and can completely understand what makes it so popular.

Portraying a marriage in the background of circumstances that are far from ideal, this story shines light on racism, the failure of the justice system and the discrimination that many unfortunately continue to face.

Roy and Celestial are a young married couple, leading a happy life, ready to start a family, he an upcoming executive and she a doll maker. Until their shared dreams for a future together are shattered by one night which separates them and puts Roy in jail for a crime he most definitely did not commit. 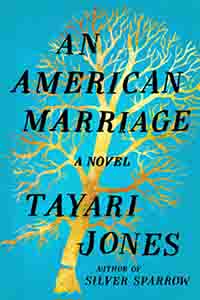 Thus begins the struggle of two people, bound by a sacred relationship but torn apart by forces they cannot conquer.

For Roy, his marriage and Celestial represent the rocks he can count on to always be there for him through his ordeal. He knows nothing else in his life will be the same when he gets out and he believes that he deserves to go home to an intact marriage whenever that is.

Celestial knows Roy is innocent and she wants to be there for him, but she soon finds it very difficult to live out her life as the wife visiting her prisoner husband. Even the knowledge of his innocence doesn’t soften the misery she feels.

At a stage when they have been apart for longer than they had been married, Roy feels Celestial’s withdrawal from his life and she, though tremendously guilty, cannot bring herself to deny it.

The letters they use to communicate with each other are heartfelt and heart breaking, expressing their own feelings and trying to understand the other person without the benefit of time in their company.

As Roy serves out his unfair sentence, Celestial makes progress in her career, exactly as she and Roy had dreamt. She also seeks solace in her friendship with Andre, whom she has known since childhood and who was the person who introduced her to Roy.

Inevitably, the friendship evolves into something she cannot and does not want to let go of though she never legally ends her marriage, choosing to continue legal support to Roy.

When Roy is released years earlier than expected, this relationship triangle has to be resolved in a hurry. With Roy hoping to pick up where he left off, confident that because his marriage exists as such, his wife still has feelings for him, Andre thinks Celestial did nothing wrong in moving on and she should tell Roy this.

Being the one who must make a choice, Celestial has to decide between the man she promised her life to years ago and the man who she believes gave her a new lease of life.

Told in the voices of Roy, Celestial and Andre, the writing poignantly presents how people involved in a situation see it based on their own feelings and actions. What they tell themselves to assuage their own guilt may not stand up to an understanding of how the other persons involved perceive their actions.

Above all, this is a story of how the failure of the justice system to save an innocent man for reasons that have nothing to do with the truth, can destroy not just him but everyone associated with him. A marriage is built over a period of time and when it does not get this crucial ingredient, it fails to remain what it is meant to be. Sometimes no one is completely right or wrong, nobody is to blame and there is no easy solution that will satisfy everyone.

A totally must read book.

This novel is a story about three people, Roy and Celestial who are recently married to each other and Andre, Celestial’s friend from childhood.

Celestial and Andre have grown up in Atlanta. Celestial’s parents are well off and she and Andre are close friends from their childhood. Roy is from Louisiana and his parents are typical rural middle class people.

It is in college that Roy is introduced to Celestial by Andre. After awhile they begin to date and they eventually marry. The story is told in chapters told from the point of view of each of the three individuals.

The story gets started when Roy and Celestial are going to Louisiana for a visit with Roy’s parents. This time instead of staying with his parents, they decide to spend a night in a local motel. It is here that Roy is falsely accused of rape. Celestial knows that Roy has not left the room all night, but despite this he is arrested, tried and eventually found guilty. He is sentenced to twenty years in prison.

The rest of the story is about how the marriage of Roy and Celestial will work out. In the chapter after Roy goes off to prison the story is told in letters written by Roy and Celestial and we begin to see first hand the effect all of this has on their relationship. When Roy’s attorney finally gets his conviction overturned and he is released we will then see if his marriage can be again what it once was, or have the childhood friends now become something more than just friends. This is a good story and the fact that each chapter is told from one persons point of view gives the reader a deeper awareness of the true feeling of each person. Any situation like this could be catastrophic to a relationship. How this turns out is a good insight into how it can heal it tear family’s apart. An Oprah Book Club selection it is an easy read at 306 pages. Recommended.