Timur Vermes - Look Who's Back

“Be warned. This book is funny. Very funny … quite brilliantly translated by Jamie Bulloch … good, edgy comedy that provides food for thought alongside the belly laughs.”

I’m not the biggest fan of politics but this book sounded so bizarre and funny I thought I’d give it a read and it really was a good read too. Hitler has returned to Germany in 2011, he has no idea how he got there and he doesn’t understand what has happened to Germany. Look who’s back, look who’s back indeed.

The first person he bumps into is a newspaper kiosk owner who instantly thinks he’s a very good impersonator, the idea snowballs and before he can say Heil, the Fuhrer is a media star. 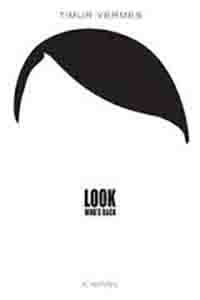 Look Who’s Back was a very funny book, making me laugh out in places, but it was shocking too and I found myself gasping in shock often, but the shock value is backed up with a very interesting satire with quite a serious message.

I don’t want to spoil the end for anyone, but I did end up wondering where it would end up, at the last page I was left open mouthed at the very clever ending. What would happen if Hitler came back today? This book is a believable account of just that.

This was one of the books I choose for my Summer Reading List with Foxy Bingo and I have to admit I included it simply based on the front cover and the bizarre blurb. It’s October 2011, Hitler has just woken up in a park in Berlin, stinking of petrol and wondering what the hell happened!

There’s a woman in charge of his beloved fatherland, Turks everywhere and the Hitler Youth are simply slovenly. Look Who’s Back is a satirical novel, funny in parts, but with serious undertones and a stark warning.

It’s slow to start, the need to know what’s going to happen keeps you reading but there was a point about half way through where I thought ‘where is this going?’. It’s worth the effort though as you track Adolf’s Hitler rise to media star and impersonator extraordinaire.

The novel concept is very, very clever and it’s well translated (the book was originally released in German). It has some real laugh out loud moments and shock factor in abundance. The novel stretches reality in parts, but Hitler, 2011? It was always going to, but it does offer a serious warning for the future too, about celebrity, about hate and about how a charismatic figure can sell almost anything.

Within the last few pages I started to wonder just how this raucous recollection of history in the cheekiest way was going to end, and well, no spoilers but it’s likely to leave you agog.