“Gripping narrative … navy buffs and thriller adepts have been mesmerised by the story of Soviet submarine captain Marko Ramius, who seeks to defect to the US, bringing a billion-dollar submarine with him”

This was one high octane spy-techno-thriller featuring Jack Ryan, everyone’s favorite low key analyst working with-in the CIA. Most of the time reading this/listening to it actually read by narrator Scott Brick, I was on pins and needles as it gets quite intense especially when the hunt is on. The basic story is a nuclear submarine is taken over by a crew of Soviets who plan on defecting to the US and bringing this new and highly advanced sub with them. It falls on Jack Ryan to determine what the commander of the Red October has planned as they aren’t given a heads up. 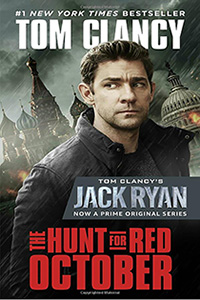 When the Russians determine that their prized sub has gone rogue, the hunt is on and the entire Soviet Navy is on a mission to seek and destroy lest in fall into enemy hands. Not all of the hands on the Red October are in on the scheme and things become tense when the plan is uncovered. Plenty of action and non stop intrigue incorporated into this work. Great work by narrator Scott Brick with all the different accents needed to bring this story to life. Highly recommend.