“An old-fashioned thriller that would do Ludlum and le Carré proud…A big book, in every sense, that’s sure to draw attention.”

The final book in the trilogy and I have to say that the author does not disappoint. As I immersed myself in the story the author takes us back in time to when Leo met his wife which was during the reign of Stalin and an American character emerges a Jazz singer and communist sympathizer who comes to visit in 1950 where he meets our protagonist and his future wife, of course his visit is scripted and the government wants him to be shown their version of the U.S.S.R., not the truth.

Now we forge ahead fifteen years to 1965, the actual story continues here from the previous two books in the trilogy, Child 44 and The Secret Speech. 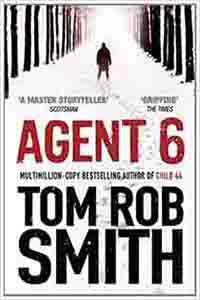 I would highly recommend to read these previous works first. First we travel from the Soviet Union to New York, USA where a tragedy occurs which effects Leo personally. Propaganda, conspiracy and cover-up come into play and being a retired agent and detective Leo is not allowed to follow up and find those who are responsible, this eats away at him and when he tries to cross the border some eight years later he is captured and sent to Afghanistan in punishment.

Now it is 1980, a war is being fought once again as the Soviet Union has invaded that country. This part of the story becomes so intense at times and the weapons used are horrific to say the least, I would hope these come from the author’s imagination but being the story is pretty much believable I think not.

The rest of the story comes someone swiftly as Leo finds his way. I thought it was one of the best trilogy’s that I have read, plenty of intense moments,very descriptive so you get the sense of where you are, well written and thoroughly entertaining.

I highly recommend for those who enjoy fictional history and thriller type novels.