“The first novel in the Child 44 trilogy, now a major movie too.”

When reality is more atrocious than fiction

Those are just part of the 44 statistics from the time of Stalin’s period of rule listed at the end of the book.
Shocking, but real. There is no fiction in the monstrocities of the regime and the descriptions of the camps in the book. The cruelty of the land- as the acion is mostly set in winter. The pictures Tom Rob Smith draws were that vivid, that I felt like I was out there in the snow with the characters. 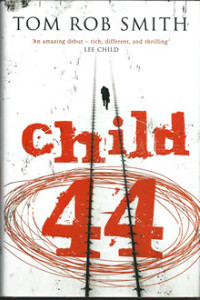 It’s a well historically researched novel, to some extent it relies on disturbng facts.
The author shares what inspired him to write Child 44 were the events around the investigation of Andrei Chikatilo’s murders- the famous serial killer who who committed sexual assault, murder, and mutilation of at least 52 women and children between 1978 and 1990 in the Russian SFSR.

But the criminal process, the injustice, the very system were more important than the real prototypes and inspired Tom Rob much more, as he shares in an interview.

Great debut novel of the English writer, which gives me the confidence to check his other books of the series about Leo Demidov. I’d definitely recommend it to all readers who like fast- paced thrillers.

I don’t do thrillers… at least, I didn’t until I read this.

This is an excellent story with plenty of twists and turns and even when the plot wobbles a bit (as it does occasionally) the setting of time and place are so well researched and portrayed it remains totally fascinating.

Set in Stalin’s USSR it is one story with two major strands. The first is a hunt for a serial killer who has been brutally killing children over a wide area of the country. The second is the gradual awakening of a man’s conscience – realising that everything he has been indoctrinated into may not necessarily be true or good.

It is both strands of this story, the way they work together that made it such a nail biter for me – I totally neglected friends, family and housework for two solid days!

I’ve never really been a fan of police thrillers but fell for the hype surrounding this one and was charmed, to some extent, by the slightly out of the ordinary setting – 1950’s Stalinist Russia.

Child 44 is, however a rather odd contradiction and I was and still am a little unsure as to whether I really liked it.

On the one hand, the plot is worthy enough, following state policeman Leo Demidov’s investigations into a series of horrific child murders. Because, in Stalin’s Soviet Paradise, crime did not officially exist (or so the author tells us) Leo’s identification of the murders as anything more sinister than a number of entirely unrelated and inexplicable accidents proves hugely embarrassing to the State.

His battle with authority, leading to his persecution, demotion, torture and exile add spice and tension to a rather workaday concept – i.e. the serial killer novel. And watching Leo’s character and ideals morph from a faithful (and feared) Soviet drone more interested in suppressing the truth than uncovering it to a moralistic campaigner for social justice provides /some/ depth.

It’s difficult to judge whether the author’s damning description of the appalling political and humanitarian state of the USSR under Stalin’s iron fist is realistic or not – it certainly SEEMS exaggerated to someone ignorant of the truth, but that just makes it all the more fun.

However, the writing is, while perfectly competent, a little drab and lifeless. And if it’s hard to feel engaged by the writing, the characterisation is even worse. Leo is the most three dimensional of the entire dramatis personae and that’s not saying much. There’s no real depth or spark to any of the characters, no matter how much Tom Rob Smith tries to explore their past, their motivation, their feelings and emotions. This is exacerbated by his strange insistence on ignoring the usual conventions for portraying dialogue (and this, again, is wooden in the extreme) which he transcribes instead in bullet-pointed italics. For instance;

In the end, there is something compelling about the story, something that caught me and pulled me along – I did in fact find it hard to put down despite its failings and even bought the second book in the trilogy. We’ll see how that goes.

This book had been gifted to me by some friends. I read the back cover to gain an insight. And the subject looked exciting.

Needless to say, I was not disappointed. From the beginning of the book to the very end, Child 44 keeps you under a spell of nail-biting suspense, anxious to know what happens next. I can’t even begin to talk about the number of sleep-deprived hours I spent just to finish that “one last chapter”.

Child 44 is one of the most successful thrillers I’ve ever read. Before I discuss the nuances of the plot, let me give an idea about the story. Officer Leo Dominov, a war hero in Stalin’s Soviet Union, starts having doubts about the political and military ideologies of his country, after arresting a man who he thinks is innocent, and after witnessing the man being tortured in the name of interrogation. His faith wavers further when he is asked to denounce his wife.

Forced with life altering choices, Leo comes face to face with a crime which his country refuses can ever exist within Communist Russia’s boundaries. The crime is “Murder”. A murderer is on the loose, killing innocent children.
What should Leo do now? Should he go back to his former duty and admit that the rules made by his country’s leaders are the ultimate truth? Or should he risk everything he had ever achieved and go against his country to try unearthing the truth?

The book starts with a hunting scene. From the very first chapter the reader is left guessing as to what happens next. The chasing scenes, the killing scenes, the interrogations, are extremely realistic and hence, all the more scary. The author has created vivid imagery through which the scenes play right in front of your eyes.

I read that Tom Rob Smith got the idea for this book after watching the TV Series called 24. I can’t wait to watch it myself now!

A few situations in the book might seem a bit unreal but the way in which they are executed make them believable. Overall, an extremely enjoyable historical thriller, with a significant amount of insight to the life in Soviet Union during the Stalin era. A thoroughly enjoyable read. Highly recommended.