Tommy Orange - There, There

“Bravura… There There has so much jangling energy and brings so much news from a distinct corner of American life that it’s a revelation… its appearance marks the passing of a generational baton.”

This is the story of 12 individual Native Americans who live in Oakland, California. Their individual stories are told in separate chapters. While some of the characters already know each other or have some sort of relationship, they all have one thing in common.

They will be attending a POW Wow. This is a celebration of their way of life. Some will be performing at the Pow Wow, trying to earn money at the competition, some will work there, some go just to see the show, and there are a few who are going to attempt to rob the place, as they know the prize money will be there in cash. 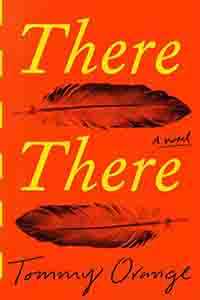 Each individual struggles with their own identity, what it means to be a Native American living in a city with few of their own kind.

The last part of the book deals with the Pow Wow where they all will come together in a blistering final. This debut novel has been much discussed in the media and is considered one of the major debut novels of the year. It is a very good book. My only problem with it is that having a chapter for each individual character who may not interact with another character in the book for many chapters made me have to go back to the previous chapters just to recall who the person was again. Except for that the book is well worth reading, is very powerful in its story, and does live up to the hype it has been receiving.