“A wide panorama with a central thread and branches, good reading.”

I’ll be honest, I read these books because they were a special offer: 99p for the whole series! Having said that, they weren’t at all bad. The protagonist, Kron Darkbow, is an (initially) enigmatic character with an impressive range of skills after a less than traditional upbringing. With the exception of the first book, the books are set exclusively in the city of Bond.

The city is medieval in character with a nascent government, and is coming to terms with a changing world after a war some years previously. The war re-drew the map into different nations with very different philosophies. Magic exists but is still viewed with a certain amount of suspicion and fear, despite there being a formal university for the teaching of same. 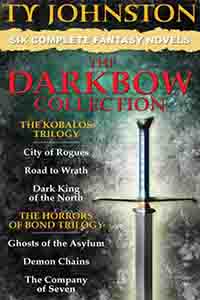 There are 6 books in the series – each of which is a complete story which can be read on its own (though it’s best to read them in order as reference is made to previous events). Each book details some kind of magical big bad – which gets bigger and badder the further into the series you go.

Word of warning – these books are *dark*. Straight forward hack and slash violence is the least of it. The very worst of human behaviour is depicted and they can be quite hard reading as a result. This is very much adult fiction and there is precious little in the way of happy endings. Gritty, urban, fantasy is definitely the way to describe these novels.