“It takes a special talent to narrate complex family dynamics and complicated truths in simple, lucid prose that doesn’t drudge even once.”

2 countries, 4 cities, a huge family, hidden secrets, strong female characters with their own shades of black and white – Ushasi has penned a Bengali saga that spans various topics like motherhood, depression/anxiety, child marriage, peer/parental pressure, sibling rivalry, domestic violence and glaring patriarchy, touching ever so slightly the pre and post-independence India and the freedom struggle. It looks at three different generations (years ranging from 1938 to 2007) through a coming of age lens. Like another reviewer wrote, it is tough to maintain this style throughout and yet not making it a difficult deal for the reader. I am amazed that this is author’s debut. 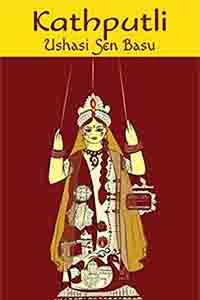 When Chitrangda Chatterjee (also called Kuhu) realizes that her life is going nowhere owing to a dull job, she decides to take up her long lost passion of writing. In search of a story and in order to come out of her depression (in a family where mental illness of any kind is considered a terrible malaise and is looked down upon), she decides to visit her hometown Kolkata where she expresses her yearning to her Thamma (grandmother). Her Thamma, who thinks she doesn’t have an interesting enough story to tell Kuhu, commands her to represent their side of the family in a grandiose family function in her native town Ajoypur. Here Kuhu meets her extended family, which is to her annoyance quite a huge and not a very pleasant one, and just as she starts questioning her decision of abiding by her Thamma’s command, a dark family secret about her family starts unraveling in front of her. While exploring this family which otherwise looks so normal, Kuhu won’t remain the same anymore.

The book goes back and forth in its narrative and assumes an almost epistolary format by the climax. While a major portion of the book are accounts of the tenacious Mukherjee women, the book also tells a story through a rough draft of Kuhu’s novel, apart from the epistolary. The story discusses the concept of ‘truth’ chronicling the fact that one’s truth is at the end simply one’s perception. So is there even an absolute truth? It also discusses motherhood in an alluring light. I think it’s a necessary realization what with societal pressures on a woman to become a mother. “Everybody isn’t born to be a parent, you know? It should be a carefully considered choice, not a bodily function that every human is expected to perform.”

I felt the need of some more character development. A demure Mala becomes an independent, self-sufficient woman – while I loved this happening, I would have loved more portrayal of its process. (Perhaps it would have diluted the actual story. I am not sure.) This is perchance the only reason why it left me asking for more.

The book is filled with delightful descriptions of Bangla cuisine. There were times I felt the aroma of Macher Jhol, luchi, aloor dum, wafting through the windows making me hungry. What I found extremely commendable is the fact that Ushasi has not once digressed into unnecessary details and this only goes on to show her incredible prowess as a focused story teller.

I would earnestly appeal to everyone who has ever asked on this forum about Indian authors who write strong female characters to go read this book. It is a stimulating read worth an investment of your mind.