“Victoria Schwab sends you whirling through a dizzying kaleidoscopic adventure through centuries filled with love, loss, art and war all the while dazzling your senses with hundreds of tiny magical moments along the way. The Invisible Life of Addie Larue will enchant readers as deeply as its heroine’s Faustian bargain; you will find yourself in quick turns both aching with heartbreak, and gleefully crowing at the truly delicious, wicked cleverness in store.”

This fantasy novel begins in early 18th Century France and ends in New York City in 2015.
Addie always prayed to the gods of the earth, the water and the sky and many times they responded to her requests. But she was always told not to pray to the Gods that answer you at night. When Addie turns 20 her family insists she marry a local boy. At first she refuses, but eventually her parents force the issue and she agrees to the marriage. On the day of the wedding Addie refused to go through with it, running away into the woods, praying to the Gods for help. It is only after dark when a God speaks to her and though she has been warned about this, she makes a deal with Luc, who represents the devil. She wants to live free forever and her wish is granted. What she gives up is being remembered. No one will ever remember who she is. The moment they are out of her sight they forget all about her. 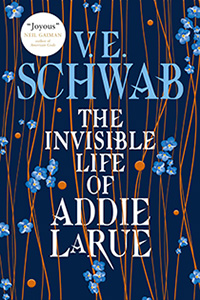 The story then shows how Addie learns to exist in this environment. Then one day Addie meets someone who remembers her and now her life changes completely. She also must continue to deal with Luc who visits her from time to time, asking if she has had enough of being alone and is she ready to surrender her soul.
The chapters switch back and forth between the past and the present, keeping the story moving along. There have been many attempts at stories like this, and depending on your acceptance of what happens in fantasy novels, will result in how much you enjoy this book.
For me it was enjoyable , an easy read yet a very good story. I would recommend this to anyone who likes this genre

The Invisible Life of Addie LaRue by V.E. Schwab was one of my most anticipated books of the year, and when I was notified, on my birthday no less, that I had been given an ARC, I genuinely squealed with delight. Sometimes building up your expectations for a book can be dangerous but I felt sure I was in safe hands with this author and I am pleased to say that not only does Addie not disappoint, it was more beautiful, more magical and more memorable than I could ever have imagined.

The premise behind the book is deceptively simple- a girl makes a deal with the devil for her freedom, but as with all Faustian bargains, there is a sting in the tail, she may be free, but she is also forgotten. We first meet Addie in eighteenth century France on the day of her wedding to a man she detests. In desperation she flees to the forest where she encounters a strangely charming man who offers her freedom, in exchange for her soul. Addie is wary but agrees , on the proviso that he can only claim her soul when she agrees that she has had enough. As is often the case, the devil is in the details, and so Addie discovers that her freedom has come at an unexpected price, she is forgotten by everyone she has ever known and is forced to flee her home. One year later the handsome devil appears to Addie again, sure that she will have had enough of her struggles and will be ready to capitulate, but he has underestimated her determination. This determination will keep her going for three hundred years, as she learns to lie, cheat and steal her way to survival, made easier by the fact that she is forgettable, turning the curse into a blessing. She might have continued in this way forever but for the fateful day she walks into a bookstore and meets a man who not only seems able to remember her, but seems keen to get to know her better.

To reveal more would spoil the magic of the story, but I will say that this is one of the most touching books I have ever read, and the ending would bring tears to a glass eye. The way it looks at loneliness, isolation and the need to belong is something that will stay with me for a long time. I also really appreciated Henry’s story and struggles which we are introduced to in the second half of the book, it is one of the most evocative and relatable depictions of depression I have come across in fiction.
Some may find the book slow paced, but I thought it was perfect, and loved the way we moved back and forward in time to get snippets of the story that stitch together to create a wonderful and memorable whole. I can’t believe how emotionally attached I became to both Addie and Henry, this is something that never happens to me, but this book somehow got under my skin in a way that few others have.
I read and reviewed an ARC courtesy of NetGalley and the publisher, all opinions are my own.