Val McDermid - The Torment of Others, The Mermaids Singing

“A tense, beautifully written psychological thriller, The Mermaids Singing explores the tormented mind of a serial killer unlike any the world of fiction has ever seen..”

Somehow I have managed to get hold of a two-novel volume of Val McDermid books, she of the Wire in the Blood TV series. I don’t like to read two books by the same writer straight after each.

The first one which I finished last week was The Torment of Others, another Tony Hill story. All the usual crime ingredients are there, murder, drugs, booze, corrupt cops … But that doesn’t worry me, that what crime fiction is all about when you bring it all down to basics. This one however, adds a secret ingredient, known only by the name The Voice. The second novel in that book is called The Mermaids Singing, another Tony Hill story – more later … … … 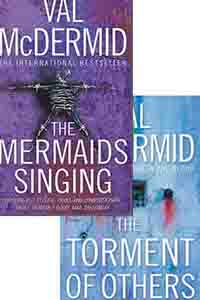 The Torment of Others then is again, an easy read for me, the first of McDermid’s books I’ve tried. I’ve since bought another. The story takes place in Bradfield, South Yorkshire. I’ve tried to work out where this fictional city is. By mixing Brad and field it could be anywhere of course, so I’ve just accepted as it is and stopped looking at maps. It is a serial murder story again of course and we have to decide who the killer is and why they killing. And yet a man was found and convicted for the first two killings. So is there a copycat at large, or did they get the wrong man? Ah ha, there is point of the story line. Wrapped up with it is two missing school boys who can’t be found or any sign of them.

Dr Tony Hill is brought in to help with a profile of course; but what of DI Carol Jordan? Does she take a part? She does, but now she is a DCI and has been living in London, on extended sick leave after her last job went bad on her. John Brandon travels to London to talk her back to work in Bradfield. Carol is not all that keen but is coaxed back to work and takes over a newly form major investigation team. Of course, everything works out in the end with a surprise murderer too.

Harper is the publisher of this one and if I’m if I’m disappointed in anything, it’s the order in which they have placed the stories. The Torment of Others was first published in 2004, The Mermaids Singing in 1994. I found that slightly odd really, but it didn’t spoil things at all. So then, Mermaids …

Again we have a serial killer on the loose, this one is killing young men though. He becomes known as the Gay Killer because he dumps the bodies in the city Gay Village, even if the victims were not gay. The Detective Superintendent running the investigation isn’t happy with the idea of a serial killer and refused to acknowledge it, so the ACC, John Brandon meets up with Dr Tony Hill and together they work towards the solution. Another body is found in similar circumstances; a man is arrested and charged, but only for the last killing. Another man is arrested, but released on bail.

Tony produces his first profile in Bradfield and is met by opposition from the leading officer, even if Tony does have the support of the ACC and CC. Eventually the lead cop is removed from the case, a fourth body is found with the same signs as the first three. Finally, a member of the team goes missing and manages to escape just as the cops arrive. DI Carol Jordon leads part of the team and becomes the liaison between Tony and the cops. She uses her brother’s expert computer knowledge to help and makes suggestions, that finally lead to the end.

Again, another easy read for me and a good intro to a new writer for me. As I’ve said, I’ve bought another book by McDermid and will keep an eye out for more. But may I suggest that if you buy this two-novel book, you read Mermaids first.