“Here it is, with perfect timing, a novel that anyone who is part of a colonising or colonised nation – and that includes, of course, America – should read . . . Nguyen is a craftsman . . . And then there’s the sharp humour . . . Like The Sympathizer, it amounts to much more than the sum of its parts. These two novels constitute a powerful challenge to an enduring narrative of colonialism and neo-colonialism. One waits to see what Nguyen, and the man of two faces, will do next.”

Just finished The Committed by Viet Thanh Nguyen
This book is the sequel to the authors Pulitzer Prize winning Novel The Sympathizer.
The leading man has now left America and has gone to Paris, the home of his father. While in the US he had served as an undercover agent for the communist party of Vietnam, keeping an eye on refugee Vietnamese who might think of returning to Vietnam to take back their country, 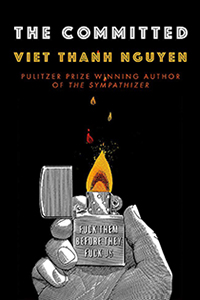 He has now soured on communism and has taken up capitalism in the form of being a drug dealer. His communist hating friend Bon is still with him, and all he still lives for us to kill communists.
Now dealing with gangsters his experiences as a former spy help him to keep his head above water in his new endeavors, but this new world coupled with his trying to keep Bon in line start to become too difficult and his new life starts to close in on him, just as an old love from America reappears into his life.
Brilliantly written like it’s predecessor, the author has once again written a terrific book full of intrigue and excitement.
A great sequel, well worth reading.