“Vivid and fascinating…Packed with passion, war, intrigue and revenge.”

Taita is an eloquent, arguably conceited eunuch of no small cerebral aptitude living in ancient Egypt. He pines for the budding womanhood of his charge, Lostris, daughter of the Pharaoh’s vizier and second most powerful man in all Egypt, Lord Intef. Taita must endure Lostris’ youthful petulance and whims while inuring himself ever more to Intef’s favour under the watchful eye of Intef’s cruel torturer, Rasfer, who once cut Taita’s manhood from him. Lostris in turn pines for the heroic and tragically down-trodden soldier, Tanus, hated and loathed by Intef but adored by Taita, who knows the secret behind the downfall of Tanus’ father and the thwarting of Tanus’ destiny that seems to dog his efforts to rise through the army ranks.

Tanus is virile, beautiful – the pinnacle of manly excellence, warrior virtue and athleticism, and in his prime. Watching the two star-crossed lovers steal longing glances midst heavy breathing and racing hearts… love is grand, no? 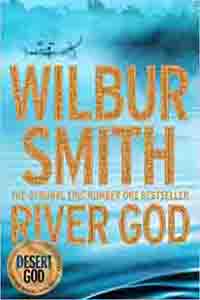 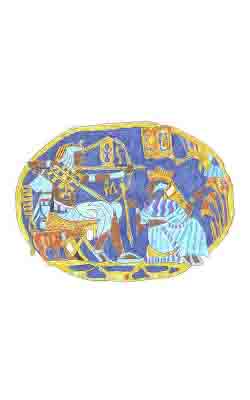 And young love all the more for its’ naivety and innocence. But the real world comes knocking: Intef plans to marry Lostris off to the corpulent, middle-aged and amenable Pharaoh, thus cementing Intef’s stranglehold of Egypt and ensuring his succession to the throne.

But Taita has long known the cruelty and sadism of his master, having been a sexual plaything, an object to torment, and because of his intellectual capacity and shrewd planning, Taita is also the eunuch-behind-the-man, so to speak.

Intef’s secret web of corruption, extortion, bribery, fraud, and embezzlement is all made possible due to Taita’s intricate machinations and talent for organisation. Survival is thus for Taita, but as Intef’s plan nears fruition, Taita is begged by Lostris and Tanus to intercede on their behalf, knowing that if he does, he invites wrath, suspicion and worse from his Lord, along with sealing the fate of the two young people he loves more than anything in all the world.

First, buy this novel. It is sumptuous and grandiloquent, and an utter joy to read. Smith offers detail and minutiae without causing delay to the pacing of the novel, and the fabric of ancient Egyptian society swims off the page before your very eyes as you follow Taita’s narration of his world and the complications that threaten his very life.

Every great hero needs a counterpart, a nemesis: Intef is gorgeous as a villain, the veritable mocking serpent poised with envenomed breath a hair’s length from striking.

What I really appreciated about Intef is that he isn’t some demon bent on wanton violence; he is a man of flesh and blood and simply wants, well, more. His cold smile instils such fear in Taita it is palpable; a well-crafted villain replete with a simple-minded brute for an enforcer. Rasfer is loathsome, but an excellent (if a little too conveniently juxtaposed) balance to the virtues of Tanus.

Taita himself as a narrator is endearing, he is egocentric and self-assured of his own supreme intelligence, but it is rarely grating, and given the trepidation and uncertainty he faces regarding his own life, his status, his position and resources, as well as his love for Lostris, he is a thoroughly likeable fellow. Ever at pains to demonstrate his cunning, he is also a bit of a rascal, but I think it encourages a little respect, and makes him a more realistic character, in as much as any person of commensurate intellect is likely to have a few vanities, and Taita is nothing if not vain. Traits becoming a eunuch, though Taita assures us he is not the simpering and effeminate type given to weeping and womanly behaviour (other than the frippery of his physical person).

It’s a rollicking yarn, well-crafted, excellent pacing, and ends on a resolute note that speaks volumes about the qualities and realities of the human condition. Rich in colour, detail, and imagination, River God may not be wholly consistent with the established archaeological record of ancient Egyptian society, but it doesn’t suffer for these minor inconsistencies. Rather, it is an exciting journey through the past, made all the more vivid by the clarity of purpose of the author.

In River God, Wilbur Smith sets out to weave a tale of a gifted eunuch in ancient Egypt; we get a grand adventure with truly endearing characters, against a magnificent backdrop of eastern grandeur and opulence. Young love, corrupt politicians, justice, warfare, turmoil, conflict, loss… all the big hits are here, and once begun, if you’ll forgive the indulgence, it really is difficult to put down. A fantastic novel, and one definitely worth your time.