William Kotzwinkle - The Bear Went Over the Mountain

“A delightful fable… hilarious and sometimes touching… Kotzwinkle has created a real star.”

Hello bibliophiles, Quintin Fortune here, and there’s an old rhetorical question about what a bear does in the woods when asked if someone wants to do something.

It appears that bears do more than I was led to believe. Such as steal manuscripts from under trees and fool the entire publishing world.

Thus, where we start with ‘The Bear Went Over the Mountain’ by William Kotzwinkle. Well, actually we start with Arthur Bramhall having lost his first manuscript to a freak fire. He uses the insurance money to build another cabin, rewrite the novel, then locks it in a briefcase and hides it under a tree.

Then, the bear shows up. Now, the bear in question was actually looking for pie, not manuscripts. I’ve had a few days like that. He finds the briefcase, thinking pie is inside, but finds the manuscript instead, reads it, and realizes that it is good enough to publish. 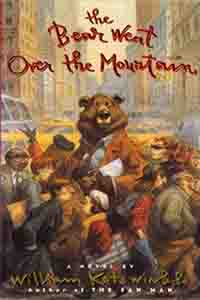 What follows is the bear, calling himself Hal Jam, running amok in New York City while Arthur slowly finds out the more literal aspects of Kafka’s ‘Metamorphosis’.

The book is entertaining. It’s not a barrel of laughs like some books, but it’s not entirely a groan-a-thon either. It’s like the movie ‘Idiocracy’. You’re reading about these people who are interacting with a bear in a suit that have no clue he’s a bear in a suit. I was waiting for someone to pull a Chicken Boo and scream “He’s a bear! A bear in a suit!” and then get carted off by security or something.

What? This book came out in ’96. It would have been alright to slide in an Animaniacs reference.

In any case, I’m Quintin Fortune, and what a bear does in the woods is it’s own damn business.