Elizabeth Haynes - Into the Darkest Corner

“Into the Darkest Corner is a gripping page-turner that will suck you in from the first scene and not let you go you until it reaches its stunning conclusion.”

While reading this book, I often lost track of time because it pulled me in and kept me hooked!

The sort of story that you read and then you look around you to check if you need to be scared as well of the dark, of unwanted intrusions, of interruptions to the life you take for granted.

Cathy Bailey is a wreck, living alone with her OCD and panic attacks causing her to spend most of her time on her checking routines. And still she is paranoid and doubts everyone and everything. 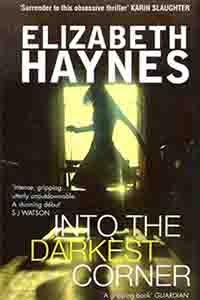 But there was a time four years ago when Cathy, then Catherine, was living it up, partying with her friends and being a high spirited, young, enthusiastic person who enjoyed life. Meeting Lee Brightman seemed to complete her life.. handsome, caring and always looking out for her and doing little things to brighten her days, he made her the envy of her friends circle.

But her paradise was slowly rocked by his controlling nature and his anger and conflicting signals he sent out. Feeling stifled and backed into a corner, Catherine tried to get out of his grasp but couldn’t… And no one believed her claims of how Lee truly was, not her friends, not the law and so, totally isolated, she made an elaborate plan of escape.

Four years later, Cathy is still living in fear though Lee is in jail and cannot harm her anymore. Meeting Stuart, her new neighbor, she gradually starts to open up and believe in a future with him.. Until the day arrives when Lee is released from jail.

Has the nightmare not ended.. Is she stupid to believe it has?

This is a chilling portrayal of what domestic abuse can turn a happy, fun loving, strong individual into. The narrative alternates between the past and the present and shows what led to Cathy being the way she is. How a relationship that was supposed to be her future spoilt her present and destroyed all her hopes.

Cathy’s very realistic paranoia is depicted so starkly that I could imagine this playing out on a screen in front of me. The kind of doubt she experiences about just about everything is heart breaking and at the same time, as a reader, you wonder if what she is thinking is true or conditioned by what she has already been put through.

A very deftly written psychological thriller in the true sense of the word. It plays on your mind and forces you to keep reading!