Helen Oyeyemi - White is for Witching

“If you’ve been missing Shirley Jackson all these many years . . . here’s a writer who seems to be a direct heir to that lamented one’s gothic throne.”

This book has been described to me as a modern horror story, as a variation on the theme of the „haunted house“. So I absolutely had to read it; wishing to compare it to other favourites of mine, such as „The Haunting of Hill House“ by Shirley Jackson. Well, it may be a horror story – in part. But it is much more, and this is what makes it so interesting.

Above all, it is a literary experiment, a feast of inventiveness on the author‘s part. I admire Helen Oyeyemi for her courage, for her daunting imagery, her use of language. I guess the book would have to be ranked as an example of „postmodern literature“. It presents the reader with at least three perspectives or versions of what happened, and then directly asks (!) us to choose: which do we believe in? 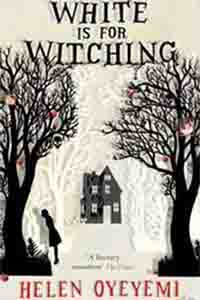 There are different voices for every „narrator“. The story is told by: the twins Miranda and Eliot, Ore, a friend of Miranda, Sade, the Nigerian housekeeper, and – would you believe it! – by the house itself! This was the most stunning feature of all – the passages where the house itself „talks“.

It is a strange house indeed. It is very possessive of all the female inhabitants of one side of the family. Anna, Jennifer, Lily… and now Miranda. They all disappear mysteriously, or eventually die… but who knows… they all become „part of“ the house. And they continue to influence the living. Insofar, one might compare the book not so much to „The Haunting of Hill House“, but rather more to „Beloved“ by Toni Morrison, or „The Shining“ by Stephen King.

I very much liked the author‘s tendency to incorporate folklore and fairy tales. Helen Oyeyemi was born in Nigeria, and this becomes palpable throughout the book. There are numerous superstitions, like drawing circles, throwing salt; even references to Voodoo do exist. Sade and Ore both come from Nigeria, too – and they are wary of the house, even afraid. And this is why the house „rejects“ them.

There are also references to Grimm‘s fairy tales, especially „Sleeping Beauty“. Apples grow in winter. Someone swallows an apple, and then chokes…

It is not an easy book to read, though – as you may have guessed. It takes some willingness on the reader‘s part to follow Oyeyemi‘s somewhat twisted imagination. The story is not told straightforwardly, not at all. There are twists, turns, flashbacks. Lenghthy descriptions of Miranda‘s „condition“ – she suffers from „pica“, a very rare eating disorder. And descriptions of Miranda‘s life at Cambridge, where she tries to „blend in“ – unsuccessfully. And at the very end, you will have to turn to the first pages and re-read them… they appear in a totally different light.

I really do not want to talk more about the contents, about the story. This is a book that has to be read, to be engaged in, to be „entered into“. Your reward will be absorption, and eventually – fascination. Welcome to 129, Barton Road…