The Dance of Desire

“At the heart of the story is the conviction that the artist must worship his or her chosen form completely to achieve perfection and that art should not be compromised by rivalry or passion or individual egos.”

One man and two women with a host of divisions and subdivisions. Sound like your usual love triangle? Not quite. Rasia the Dance of Desire is about a stern handsome Bharatnatyam dancer Raj Subramaniam of the sculpted muscles and the soul of an ascetic who gave up a corporate job to set up his own Bharatnatyam dance troupe.

Along the way Raj acquired a Bengali wife whom he saw dancing to the beat of the dhaaks at a puja pandal. And then, after he and his wife Manasi had become headline news for their dance academy, he met Vatsala, the firebrand aggressive New Yorker who works in advertising, has mastered ballet and, after seeing a performance based on the story of Chitrangada, wants to master the dancer too. 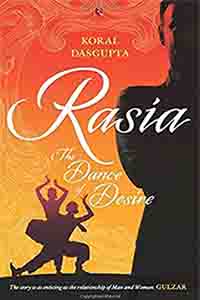 He, however, ignores her completely barring an offhand comment that should he set up a dance academy in New York, she would be his first pupil. The feisty Vatsala doesn’t give up easily by sure force of letter writing and contacts, she achieves her goal. However when she and the dancer are face to face, she discovers that her dreams are not coming true. She has the lessons she covets, but not the guru’s heart. In between them is Manasi, the wife left at home to choreograph the academy’s first dance performance in New York.

Dasgupta writes her story from several viewpoints, from that of a journalist who is writing the story of the triangle, from that of the dancer, Manasi, Vatsala and the ghost presence of Manasi’s wise priest father, another corporate who retired to follow a different calling. In the story the men are believers in discipline and tradition.

She builds up the tension between Vatsala and Raj breaking it with her voices and Manasi’s choreography planning in India in her husband’s absence. Bharatnatyam’s dances are based on mythology and quite obviously the first dance performed by Raj’s academy in New York must be mythological, not to mention spectacular. Through her choreography Manasi unconsciously manages to find a mythological parallel that mirrors the situation unfolding in New York. And quite obviously she and the other dominant woman in the story have to come face to face.

It could have been the tale of a groupie who seduces an implacable dancer and proves that everyone has their weaknesses. However Dasgupta takes it beyond that while keeping the framework. What she builds is a tale of loyalty and discipline, contrasting the confident, aggressive single woman who is typical of the 21st century world with the obedient, supposedly submissive wife who is, nonetheless an artist in her own right. The question is who will win and will it come down to a matter of choosing one over the other for Raj?

Rasia could also have been just another story of the ins and outs of falling in love in a world of high voltage superstars bent on international domination, but the story comes across as slightly more complex. At the heart of the story is the conviction that the artist must worship his or her chosen form completely to achieve perfection and that art should not be compromised by rivalry or passion or individual egos. A tough lesson for many artists to learn – because egotism, rivalry and passion have been associated with the arts since time immemorial.