Pat Barker - The Women of Troy

“Like its predecessor, The Women of Troy returns voice and agency to characters who were silenced in the original epic… Barker’s writing is swift, detailed, and immersive… [The Women of Troy] succeeds at making us understand that what they felt–the grief of the Trojan women–cannot have been much different than our own.”

Just finished The Women of Troy by Pat Barker. This sequel to The Silence of the Girls begins at the point that the last book ended. Troy has fallen, the Greeks are dividing the spoils of war amongst themselves, including the woman. Many former woman of high standing in Troy, including the Queen, are now wives or slaves of the conquerors.
This is mainly the story of Briseis, a Trojan woman captured before the fall of Troy and given to Achilles as his wife. 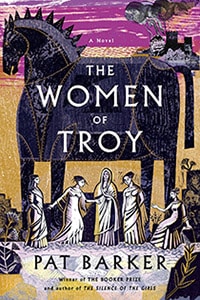 Achilles is now dead but Briseis carries his child. She has been married off to a good friend of Achilles, who never touches her but simply awaits the birth of the child.
The Greeks cannot return home because the strong winds will not allow their boats to sail home, so they are stranded on the beach, wondering why the Gods are so angry and Briseis must try to aid and protect the fallen woman of Troy as best as she can.

Briseis will encounter many problems, many of the utmost danger. The dead King of Troy lies unburied on the beach and some of the woman of Troy want to bury him, though it has been forbidden. This amongst other things will Briseis have to work through, trying to keep as many woman as she can alive.
A very good sequel, those interested in the Helen of Troy saga or The Iliad will find the book well worth reading.