Harper Lee - To Kill A Mockingbird

To Kill a Mockingbird is arguably one of the most famous American novels of all time, and has been regarded as a modern classic since it was originally published in 1960. Despite having a copy for years, I’m ashamed to say it remained on my ‘To Read’ list for a long time until, earlier this month, I decided it was high time I gave this highly praised book a go. Like many other classic novels I’ve read, I approached To Kill a Mockingbird with a certain sense of apprehension. The amount of praise given to books like this can sometimes make it impossible for them to live up to their own hype. I’d heard great things about Lee’s book, but would it impress me like it has so many others, or would I be left wondering what the fuss is about? I’m pleased to report that, in my opinion, To Kill a Mockingbird not only lives up to its reputation, but even surpasses it. 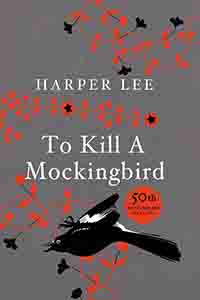 Inspired by Lee’s own childhood growing up in a small town in Alabama, To Kill a Mockingbird follows a young girl named Jean Finch, nicknamed Scout, and her older brother Jem, as they grow up in the quiet fictional town of Maycomb during the Great Depression. Though the country is experiencing a great deal of hardship, the two Finch children are largely untouched by these troubled times and enjoy an idyllic childhood playing with their friends and attending school. Their father, Atticus, works as a lawyer and raises his children in a watchful but easygoing manner as he tries to instil in them his sense of morality and justice for all.

Trouble strikes after Atticus is appointed to defend a black man who is accused of raping a white woman. Atticus firmly believes the man to be innocent and, though the odds are heavily stacked against him, he endeavours to do everything he can to prove the man’s innocence and convince the white jury to look past their prejudices. We follow the events through the eyes of the Finch children as they struggle to understand their neighbours intolerance and the social boundaries between white and black people.

While To Kill a Mockingbird’s primary theme is racism, issues such as class, gender roles, compassion, courage, law, and the loss of innocence are also thoroughly explored, and to say the novel is simply about one of these things would be doing it a disservice. Despite their hostility towards him, Atticus shows nothing but empathy and compassion for the townspeople of Maycomb and insists on finding the good in people, no matter how rough or crude they may be.

Given the book’s racial themes, and the fact that it centres around the alleged rape of a young woman, it would be easy to assume that the book is a heavy read, and by rights it should be, yet somehow Lee’s writing is so full of warmth, charm, and humour, that it takes the edge off the horror of the issues our heroes face without sugar-coating them. The characters are all superbly well realised and I found myself feeling like a resident of Maycomb who knows all the quirky townsfolk that inhabit it. As well written as the supporting cast are, it’s easily the Finch family that steals the show, along with their caring but no-nonsense black housekeeper Calpurnia. Atticus may not be the traditional father society had in mind during the era, but his love for his children is undeniable and his encouragement of their curiosity sees them growing up with a role model we all hope to be for our children. I became so fond of the Finch family that I was terrified some tragedy might befall one or all of them as the trial unfolds.

The fact that the story is told through the eyes of a child is an inspired decision by Lee. As children, Scout and Jem are innocent enough to be unaware of many of the unwritten rules of life between black and white people and they dare to question and challenge the status quo. As the saying goes, Wisdom often comes from the mouths of babes and Scout and Jem sometimes show more sense and empathy than many of the adults in Maycomb. Their childhood games also allow the reader a reprieve from the adult themes of the novel and allows readers to lose themselves for a while in the children’s childhood games, their school life, and their obsession with catching a glimpse of Boo Radley, the shut-in that lives nearby.

To Kill a Mockingbird is truly a book everyone should read once. Don’t be a fool like me and have it on your ‘To Read list’, it’s well worth your time. The book has many lessons to teach us and, since finishing it, I’ve found myself trying to see things from other people’s perspectives whenever I become frustrated. It is true that the book does contain racial slurs and outdated language that was commonly used in the 20th century. I appreciate that there’s very good reason language like that isn’t tolerated today but it would completely miss the point of the book were the novel to omit such language. We must learn from our history, but not forget it.

I highly recommend To Kill a Mockingbird to all readers and I especially encourage young readers to give it a go. I’m glad to know it’s taught in schools across the US but its lessons are of value to anyone, regardless of their geography, background, or ethnicity. Harper Lee hasn’t just written a book, she has given us a gift, one that we should cherish and pass on.

If I could give this book a higher rating than 5 I would. Of course I have read it before, I think it was required reading in high school, but what an amazing book, truly worth multiple readings.

Atticus is a small town Alabama lawyer in the late 1930’s raising his 2 children, Scout Finch and Jem Finch, by himself. Atticus is the person and the parent I would like to be, a great human being, someone who can love and understand and bring about change in the world.

The book is written from the point of view of Scout, a lovely lively 5 to 8 year old over the course of the story. She refuses to wear dresses and fights with the best of them.

Jem is her big brother and he is a great kid too. Well no wonder when they are being raised by Atticus. The kids learn to understand the world they have been born into with all of its hypocrisies, oddities and entanglements.

When a 19 year old white girl who lives with her father and younger siblings in horrible poverty and no kindness, when this girl accuses a young negro man of rape, Atticus is assigned to defend the young man. This is Alabama in the 1930’s, you can guess how it turns out, but everything Atticus says and does is so necessary for the people and his children to hear and understand. Terribly sad but change comes slowly.

Then there is the strange unseen neighbor, Boo Radley. He is a source of much speculation and fear for the children. We see who has a kind heart and who does not, who might be capable of change and who is not. I loved this book and cried over it quite a bit. It is a treasure and deserves every accolade that it has ever received.

I first read To Kill A Mockingbird as a set book when I was in Secondary School. I loved it right away and read It in a week, it was supposed to take us the whole term!

To me it is the simplicity with which the story is related that brings the message of life in the rural American South in the 1930s. If the story of the racial tension and social inequality had been told from the perspective of an adult, it would have been a totally different book.

By exploring the issues from Scout’s angle it brings a certain poignancy and moral outrage to the story lines involving the main characters and how the things happening around affects them.

This is a book that I have returned to many times, in fact I’ve replaced it at least three times ion the past 40+ years since I first read it. My reason for this is simple – it is a great book , well written and with a universal theme that is as relevant today as it was in the era of Scout, Jem & Dill.