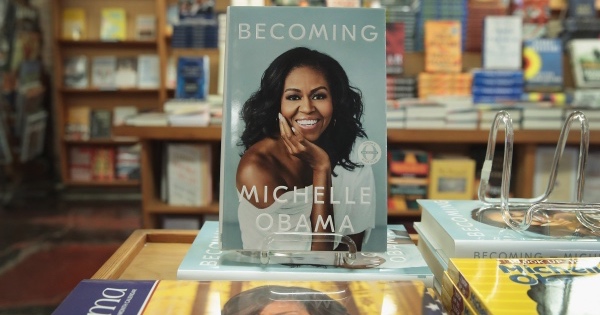 In 2018, former First Lady Michelle Obama published her memoir Becoming, which was met with critical acclaim.

The memoir was the highest-selling book in the United States of that year and has only just started to be printed in paperback.

In order to mark the new paperback edition, as well as the younger reader edition, Mrs Obama participated in a Zoom call with students from Elizabeth Garrett Anderson School in Islington and Mulberry School for Girls in Tower Hamlets.

The range of topics included mentorship, motivation, and leadership, with Obama saying: “Conversations like these keep me optimistic. Meeting all of you, watching your growth… you all give me hope. Listening to how thoughtful and insightful you are, how resilient and determined you’ve been, how strong and capable you are.”

If you would like to watch the conversation, you can check it out on YouTube where it was uploaded by publisher Penguin. BBC’s The One Show also aired a film about the event and it will be shared with schools around the country via Penguin Talks, a service designed to deliver free talks and education packs to young people.

As The Bookseller reports, this is not the first time the former First Lady has worked with the two schools. In 2009 she visited Elizabeth Garrett Anderson School and has remained in contact since. She returned in 2011 to take several pupils to visit Oxford University, where she gave a talk to Christ Church College, then, a few years later, she invited 12 students to visit the White House.

Writing of her visit in her book, Obama wrote: “They were me, as I’d once been. And I was them, as they could be. The energy I felt thrumming in the school had nothing to do with obstacles. It was the power of 900 girls striving… Looking up at the girls, I just began to talk, explaining though I had come from far away, carrying this strange title of First Lady of the United States, I was more like them than they knew.”

Elizabeth Garrett Anderson School’s headteacher, Sarah Beagley said: “Mrs Obama has been a part of EGA since her first visit 12 years ago before our year seven students today were born. Since 2009 she has stayed true to her word, continuing to connect with us in multiple ways, and remains a truly inspirational figure for generations of EGA students. Her story, her passion and her determination to make a difference to the lives of others resonates completely with the values of EGA and we are proud and delighted that she values her relationship with us as much as we do with her.

Mrs Obama’s first visit to the Mulberry School for Girls occurred in 2015, as part of her tour to promote her “Let Girls Learn” campaign, which emphasises girls’ education globally. The Mulberry girls decided to join the movement, establishing the Global Girl Leading after Obama invited them to come to the White House.

CEO and headteacher of Mulberry School for Girls, Dr Vanessa Ogden said: “At Mulberry School for Girls, students past and present are so excited about the launch of Michelle Obama’s book Becoming, specially adapted for young readers. Childhood and adolescence are such a formative period. Learning from Mrs Obama—one of the greatest, most inspiring women of our time—could not be more important. Her use of her platform to drive change for girls is critical, breaking down barriers to education and building a sisterhood of young women advocating for each other. Mulberry is deeply grateful to Mrs Obama for her generosity and support for our girls, providing many opportunities for them to have a voice and inspiring them to found Global Girl Leading as a legacy of her relationship with us.”